5 Most Beautiful Lakes In China

China is a multi-lake country, with lakes all over the country, forming part of the country’s beautiful scenery. These five lakes are the top ranked.The 5 Most Beautiful Lakes In China are: 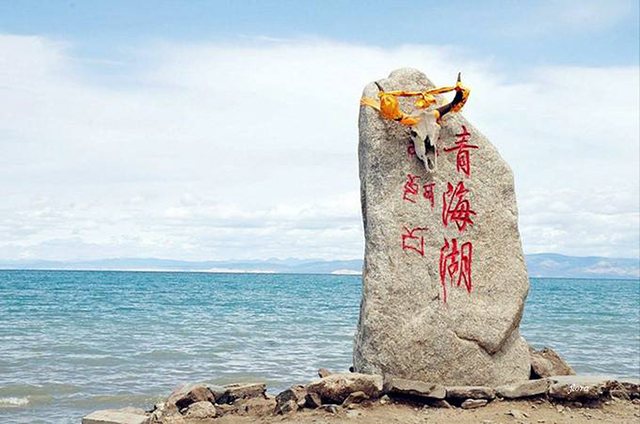 Qinghai Lake, the Tibetan language is called “Tuwenbu” (meaning “blue sea”). Located in the northeastern part of the Qinghai-Tibet Plateau, Qinghai Province, China’s largest inland lake and saltwater lake. The fault is formed by the fault between the Datong Mountain, the Riyue Mountain and the Qinghai Nanshan Mountain in the Qilian Mountains.
On July 30, 2012, the latest remote sensing monitoring results of the Qinghai Institute of Meteorological Sciences showed that the area of Qinghai Lake continued to increase for 8 years.
At 9:50 on October 20, 2014, a spectacular scene of “Dragon Water Absorption” appeared on the north side of Haixin Mountain in Qinghai Lake. 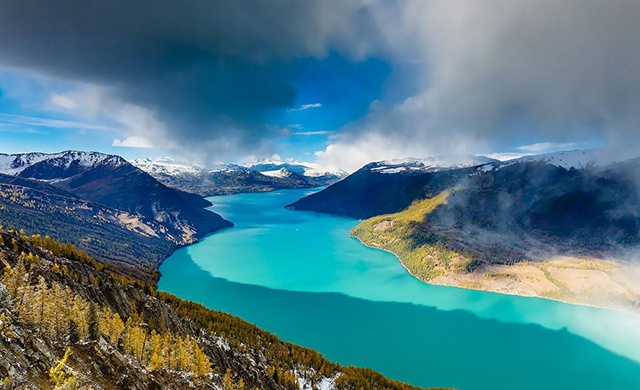 Kanas Lake: National AAAAA-level tourist scenic spot, National Geological Park, National Forest Park, China Nature Reserve, National Natural Heritage, National Low-carbon Tourism Experimental Zone, China’s most beautiful lake, Kanas Lake Snow Peak The green slopes of Molin, the lakes and mountains are beautiful, and are known as “the paradise on earth, the garden of God.”
“Kanas” is Mongolian, meaning “beautiful and mysterious lake.” Kanas Lake is located in the northern part of Burqin County, Altay Prefecture, Xinjiang Uygur Autonomous Region. The lake comes from the glacial meltwater and local precipitation of Kuitun and Youyifeng. The lake is 1374 meters above sea level, with an area of ​​45.73km2, and the deepest elevation of the lake is 1181.5 meters. 188.5 meters, with a water storage capacity of 5.38 billion cubic meters, is the deepest ice lake in China. It is a mountain lake and inland freshwater lake located in the deep forests of Altai.
The Kanas Lake Scenic Area consists of bizarre natural landscapes such as mountains, rivers, forests, lakes and grasslands, historical and cultural relics such as the Genghis Khan Western Expeditionary Point, ancient rock paintings and the unique folk customs of the Mongolian Tuva. The main attractions such as Neck Bay, Hulun Lake, Wolong Bay and Guanyutai have extremely high tourism, nature protection, scientific investigation and historical and cultural value.
There are several wonders in Kanas Lake. One is the long dry wooden dyke. It is because the driftwood in Kanas Lake is blown by the strong valley wind and floated on the upstream of the lake. The second is the giant in the lake. Water monsters, often dragging horses drinking water by the lake into the water, adding a bit of mystery to Kanas. Some people think that it is a kind of big red fish (Zhe Luozhen) of local specialties. The wonders that are rare when it is sunny – Kanas Yunhai Buddha Light. 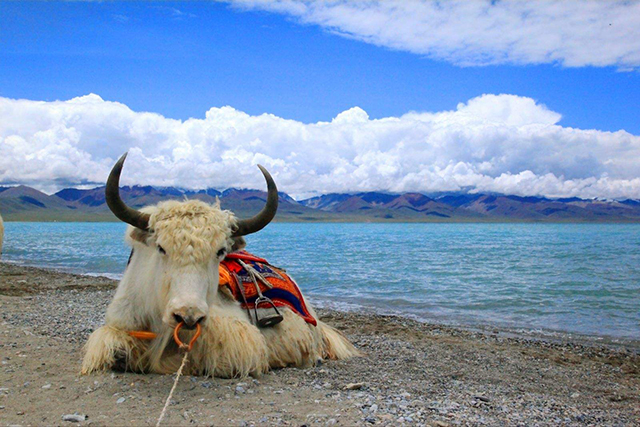 Nam Co, located in the middle of the Tibet Autonomous Region, is the second largest lake in Tibet and the third largest saltwater lake in China. The lake is 4,718 meters above sea level, with a rectangular shape, more than 70 kilometers from east to west, more than 30 kilometers wide from north to south, and an area of about 1920 km2.
Early scientific research concluded that the maximum depth of Nam Co was 33 meters, but the re-measurement of the lake in the last two years found that the deepest point of Nam Co was more than 120 meters. With a water storage capacity of 76.8 billion cubic meters, it is the largest lake in the world
“Namu wrong” is Tibetan, and the Mongolian name is “Tengger Sea”, which means “Tianhu”. Nam Co is one of the “three great holy lakes” in Tibet. Namtso is the first god lake of the ancient elephant Buddhism, and is one of the famous Buddhist holy places.

4.Changbai mountain pool in the sky:Calm after the wrath 长白山天池：盛怒之后的平静 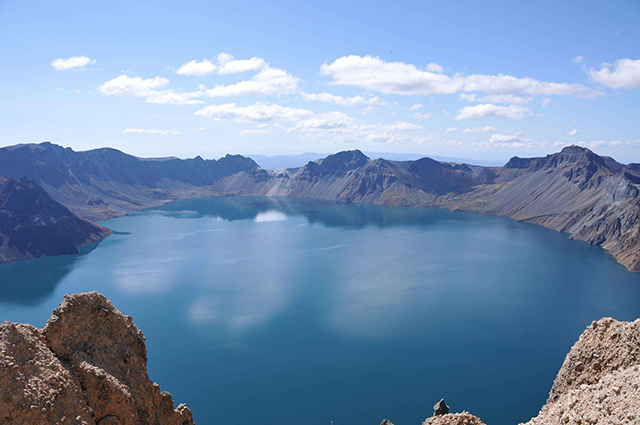 Changbai mountain pool in the sky is a dormant volcano. The crater accumulates water into a lake. The water in the summer is more blue than the sky. The white snow in winter is surrounded by 16 peaks, only in Tianfeng Peak and Longmen Peak. There is a narrow pool of water overflowing, and the diarrhea grows into a white waterfall, which is the source of the Songhua River.
Changbai Mountain was formed in the geological orogenic movement 12 million years ago. After many eruptions, it has become a giant umbrella body. When the volcano is dormant, the spring overflows, forming a vast surface of more than ten square kilometers. Tianchi is 2189.1 meters above sea level, slightly elliptical, 4.4 kilometers long from north to south, and 3.37 kilometers wide from east to west. The catchment area is 21.4km2, the water surface area is 9.82km2, the water surface circumference is 13.1 kilometers, the average water depth is 204 meters, and the deepest point is 373 meters. The total water storage capacity is 2.04 billion cubic meters. The water temperature in Tianchi is 0.7°C-11°C, and the annual average temperature is 7.3°C. Tianchi is like a magnificent jasper inlaid among the majestic peaks of Changbai Mountain. It is the largest volcanic lake in China and the deepest mountain lake in the world. Now it is the boundary lake between China and North Korea. 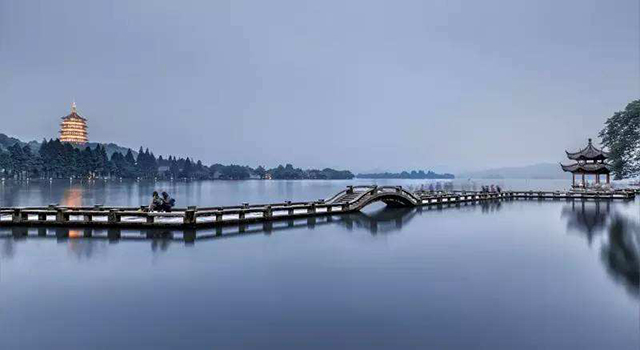 West Lake, located in the west of Hangzhou, Zhejiang Province, is one of the first national key scenic spots in China and one of China’s top ten scenic spots. It is one of the main ornamental freshwater lakes in mainland China, and is one of the few World Heritage Sites and the only lake cultural heritage in China.
The West Lake is surrounded by mountains on three sides, covering an area of 6.39 square kilometers, about 2.8 kilometers wide from east to west, 3.2 kilometers long from north to south, and nearly 15 kilometers around the lake. The lake is separated by Gushan, Baidi, Sudi and Yanggong Dikes. According to the size of the area, there are five water faces, namely, West Lake, Xili Lake, Beili Lake, Xiaonan Lake and Yuehu Lake. Su Di and Bai Dike cross the lake, Xiao Wei Chau The three small islands of Huxin Pavilion and Gonggongdun stand in the heart of the West Lake, and the Leifeng Pagoda in Xizhao Mountain and the Baoding Tower in the Gem Mountain are separated by the lake, thus forming “One Mountain, Two Towers, Three Islands, The basic pattern of the Three Dykes and Five Lakes. 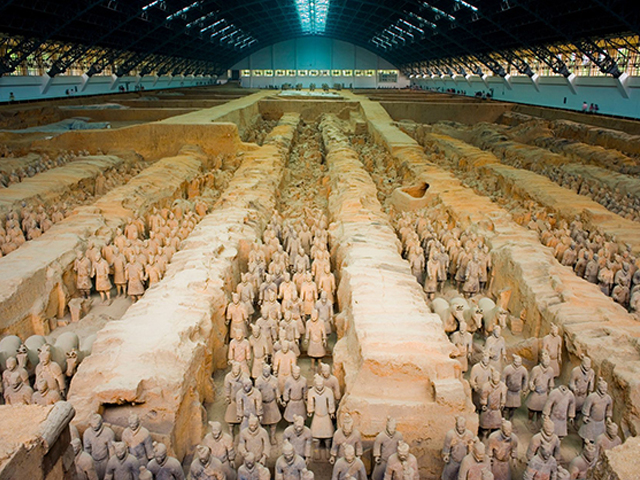 What You Need To Know About Qin Dynasty Of China 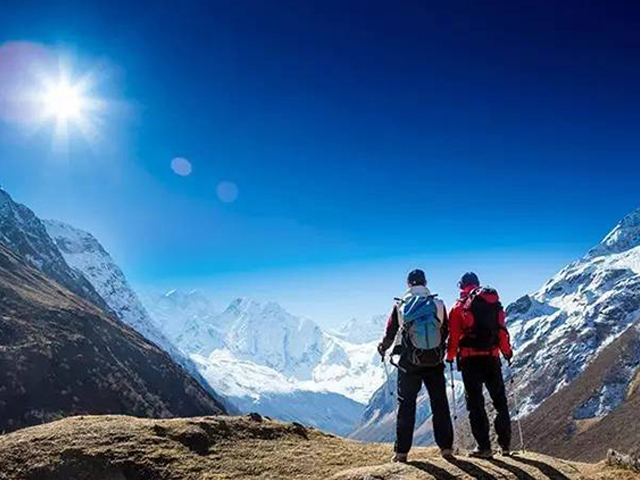