The village of Baihaba is known as the first village in the northwest and the first outpost in the northwest. It is located in the village of Tielekiti in Habahe County, Altay, Xinjiang, on the border between China and Kazakhstan, only 1.5 kilometers away from East Silek Kilometers, there are national defense highways connected. Bai Haba Village is known as one of the eight most beautiful towns in China. Bai Haba Village is a village where primitive natural ecology and ancient traditional culture blend in. Everything still preserves the original primitive features that have been inherent for hundreds of years, mainly Tuwa people. , Located on the flat ground of the valley of the Altai Mountains, facing the mountains of Kazakhstan, the dense golden pine forests on the Altai Mountains extend to the village of Baihaba, and the wooden houses and the fences of livestock for the villagers are scattered in a scattered manner. Among the pine forest and the birch forest, tranquility and harmony. 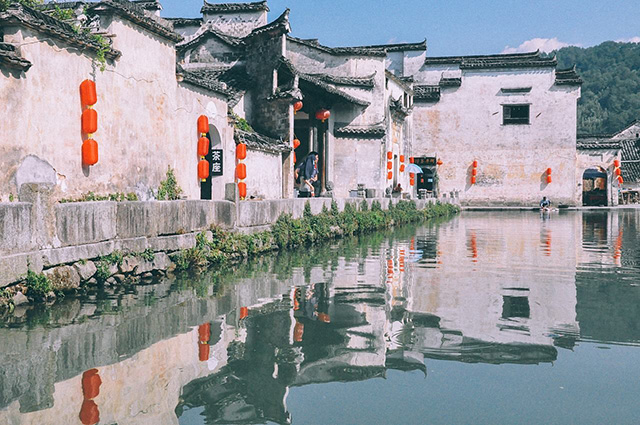 Xidi, Hongcun are world cultural heritage and national AAAAA tourist attractions. Xidi, Hongcun are located in Yi County, Huangshan City, Anhui Province. They are two representative ancient villages in southern Anhui. With the idyllic scenery, well-preserved village shape, exquisite craftsmanship and colorful Huizhou houses The historical and cultural connotation is famous all over the world and is known as “the village in the painting”. Xidi, Hongcun’s “layout work, ingenious structure, beautiful decoration, fine construction, deep cultural connotation” are rare in the ancient residential buildings in China, and are a pearl in Huizhou residential houses.

Shanzhong Village, also known as Gushanzhong, is located in Mayangxi Ecological Tourism Zone of Changtai County, Zhangzhou City, only one mountain away from Xiamen Jimei District, 16 kilometers away from Guankou Town, and 29 kilometers away from Changtai County. It is a “national ecological demonstration” “Village”, “National Famous Scenic Tourism Village”, “Fujian Province’s first batch of four-star rural tourism operation units”, “Fujian Rural Tourism Demonstration Spot”. Shanzhong Village is known as “a thousand-year-old village, a middle reaches of mountains and rivers”, and the rapeseed, peach and plum blossoms attract the most tourists every spring. “,” Farming Experience “and other special rural tourism products, including sweet potatoes, Amomum villosum, soil eggs, corn and other rich special agricultural products, there are thousands of ancient camphor trees, stone pagodas in the Song Dynasty, Zhaoling Palace in Ming Dynasty, Zilong Historical and cultural resources such as temples, Shuiyunjian, centuries-old folk houses, Xue’s and Lin’s family temples. While watching the natural beauty of the mountainous countryside, tourists can also “eat farm dishes, live in farm houses and do farm work” to enjoy the wildness of the countryside.

Longchuan Village is located 11 kilometers east of Jixi County, Xuancheng City, Anhui Province. It is formed by the merger of the three villages of Yuankeng, Huli, and Hengchuan. Longchuan Village is a typical mountain village with “eight points of landscape, one field, one road and manor”. The agricultural economy is dominated by the cultivation of traditional crops, and the main source of income is the income from the cultivation of traditional agricultural products, the dual-use forest of bamboo shoots, tea and migrant workers. The villagers in this village follow the traditional thought of Hui culture, and the ideology of self-sufficiency, industrious simplicity, and hard struggle dominates, and the folk customs are relatively simple.

Dehang Scenic Area is located in the west of Jishou City, Hunan, with an area of 108 square kilometers. It was approved as a provincial scenic area by the Hunan Provincial People’s Government in 1991 and was declared a national key scenic area in 2005. In Miao language, ‘De Bang’ means ‘beautiful grand canyon’, where the mountains are ups and downs, the cliffs are high, the peaks and forests overlap, forming many cliffs, stone walls, waterfalls, and primitive forests. The rivers and creeks in the area are staggered, the seasons are like spring, the climate is pleasant, there are rich animal and plant resources, and the natural scenery is beautiful and charming.

Mohe Arctic Village Tourist Scenic Area is a national AAAAA-level tourist scenic spot, the most attractive tourist scenic spot in 2014, and the northernmost tourist scenic spot in China. The Arctic villagers are simple in style, quiet and fresh, rich in rustic flavor, and the vegetation and ecological environment are well preserved. Whenever the polar day occurs around the summer solstice, midnight looks north, the sky is white, like evening, like dawn. People can play chess and basketball outdoors, and if they are lucky, they can see the magnificent and colorful Northern Lights. The Arctic Village is not just an ancient town with a long history, but has gradually become a symbol and a coordinate. Every year, many people come from all over the world to experience the northernmost happiness.

Taichi Lake Village, also known as Lake Village, is located about 17 kilometers northeast of Jixi County. The Longchuan pivotal secretaries of the Southern Song Dynasty buried Hu Yunlong here. The descendants of the Hu family guarded the tomb into a village. Later, the Zhang family surpassed the Hu family and became the surname of the village. The Yuanxi River passes through the village and has an anti-S shape. The Hexi is the village and the Hedong is the farmland. The whole village looks like a Taiji map. In April, you can enjoy the rape blossoms on the farmland. Compared to other Hui-style ancient villages, Taiji Lake Village is not big, but it wins with many brick-carved gate towers, and the fine brick-carved layers are superimposed, with a maximum of nine layers. Many former residences of celebrities (Zhang Xianghua, founder of Huicai restaurant industry, and writer Zhang Yiping, etc.) are also preserved. The region is a must-have swing and a pavilion, and the king stone is a living fossil of Huizhou architecture and Huizhou culture.

There is an ancient and mysterious village on the banks of Fushui River in Qingyuan District, Ji’an City, Jiangxi Province. This is a typical Jiangyou Minzu village. It is the ancient village of Meipi known as the “Luling Culture First Village” It is also a key cultural relics protection unit in Jiangxi Province. It was announced as the second batch of famous Chinese historical and cultural villages by the Ministry of Construction and the State Administration of Cultural Heritage in 2005. In 2009, it was rated as a National 4A Tourist Scenic Spot. It has attracted the world’s attention with its thick history, classical Ming and Qing buildings, bright Ming and Qing carving art and respectable red culture. Meipi Ancient Village is located on the Fushui River in the southeast of Qingyuan District, Ji’an City, Jiangxi Province, 30 kilometers away from Ji’an City. It belongs to Wenbei Town, Qingyuan District.

Explosion of The Forest Fire in Nyingchi, Tibet