The Tang Dynasty can be said to be one of the most prosperous dynasties in history. Not only did the culture flourish, many poets have emerged, but also many prosperous scenes have been created at the same time. The participation of the ministers, especially the prime minister who has powerful power, let us take a look at the top 10 prime ministers of the Tang Dynasty in China. 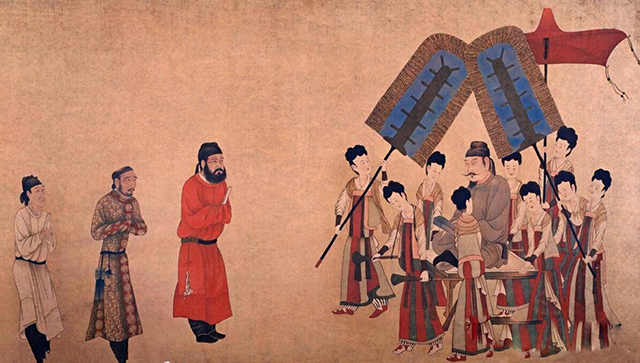 Time of death: 22 years of Zhenguan
Title: Liang Guogong
Main achievements: One of the 24 heroes of Lingyan Pavilion
Fang Xuanling, a native of Linzi, Shandong Province, first joined Li Shimin after assisting in Jinyang alone, and became one of his most valuable counselors. In the Xuanwumen Incident, five people, including Du Ruhan, made great contributions to Qin King Li Shimin and later helped Tang Taizong create the rule of Zhenguan.

Time of death: Four years of Zhenguan
Title: Lai Guogong
Main achievement: Planning the Xuanwumen Incident
Du Ruhui, born in Xi’an, Shaanxi, was also a member of the founding fathers who assisted Li Shimin. During the Jinyang Uprising, he successively calmed down major rebellions such as Dou Jiande, and also participated in the planning of the Xuanwumen Incident, due to his decisive character, and Fang Xuan Ling was called “Fang Mou Du Duan” together, it was Li Shiming’s left arm and right arm, and later he was named Lai Guogong.

Time of death: first year of the first year
Title: Qi Guogong
Main Achievements: Lingyan Pavilion first 24 heroes, founding veteran
Zhangsun Wuji, a native of Luoyang, Henan, was also the founding father of the Tang Dynasty. For many years, with Li Shiming’s battle on the battlefield, he was the first hero in Lingyan Pavilion. He also assisted Tang Gaozong in his throne. It is arguably one of the ten most famous prime ministers of the Tang Dynasty.

Time of death: the first year of Jiu Shi
Title: Liang Guogong
Main achievements: Persuaded Li and continued Datang
Di Renjie, born in Taiyuan, Shanxi, is a famous prime minister during the Wu Zetian period. I believe that like the first three prime ministers, many of them are seen on the silver screen. The image of heroic investigation and jealousy is also deeply rooted in the hearts of men. He was murdered twice, so he became the prime minister twice. Later, he persuaded Wu Zetian to establish Li Xian as the prince, only to restore the Tang power.

Time of death: 17 years of Zhenguan
Title: Zheng Guogong
Main achievements: One of the 24 heroes of Lingyan Pavilion, well-known minister
Wei Zheng, a giant deer in Hebei, was originally a counselor to the brothers of Li Shimin, and was adopted for his own use after the Xuanwumen Incident. Wei Zheng was a famous confidante in history. He did not fear the majesty and character of the emperor. Decisively and directly, he will not budge in any way that is bad for the country. He played more than 200 obituaries during the Zhenguan years, which greatly helped the formation of the rule of Zhenguan.

Time of death: Nine years of Kaiyuan
Title: Liang County Hou
Main Achievements: Propose a Dragon Coup, and assist Xuanzong to create a prosperous world
Yao Chong was born in Shaan County, Henan Province. Since the Wu Zetian era, he has successively held the post of Prime Minister and Monk of the Three Dynasties. Whether it is to clear the rebel party or to implement the New Deal, his role is indispensable. The heyday, so he and Fang Xuanling were called “Four Great Men in Tang Dynasty”.

Time of death: Nine years of Kaiyuan
Title: Liang County Hou
Main Achievements: Assisted Tang Dynasty in Five Dynasties to Create Prosperous Age
Song Jing, born in Hebei, has gone through five generations of succession. He has supplemented Wu Zetian, Tang Zhongzong, Tang Xuanzong, and others. He has spent all his energy for the Tang Dynasty and is also one of the “four wise men of the Tang Dynasty”.

Time of death: the first year of Shenlong
Title: Hanyang King
Major Achievements: Revival of Li Tang, Launch of the Dragon Coup
Zhang Jianzhi, a native of Xiangyang, was first recommended by Di Renjie and later recommended by Yao Chong, becoming the prime minister step by step. He helped Tang Zhongzong and Li Xian to restore the throne, and the Li and Tang dynasties were kept. And after death, enjoy the temple court of the Tang Dynasty.

Time of death: 28th Kaiyuan
Title: Chinese Book Order
Main achievement: The last famous appearance of Kaiyuan prosperity
Zhang Jiuling, a native of Qujiang, was the last generation of famous figures in the Kaiyuan years. Initially he was promoted by Zhang Yue and later became prime minister. He was assisted by Tang Xuanzong. Poetry was very famous. Even Wang Wei and Du Fu praised his articles. .

Time of death: Eighteenth Kaiyuan
Title: Yan Guogong
Main achievements: Three visits to the Prime Minister, leading the literary world
ZhangShuo, born in Luoyang, Henan Province, participated in the Imperial Examination in his early years and won the first place in the world. Like Zhang Jiuling, his literary talent is very outstanding, leading the literary world in the Tang Dynasty’s Kaiyuan period for 30 years.