1.Plum blossom – the leader in the flower

Plum blossom is the first of the top ten famous flowers in China. It is listed as “four gentlemen” together with orchids, bamboo and chrysanthemums, and is called “three friends of the cold”. In the traditional Chinese culture, Mei’s high-quality, strong, and modest character gives people the determination to make the best of traditional Chinese flowers and fruits. It has been applied for more than 3,000 years.

2.Peony – the king of flowers 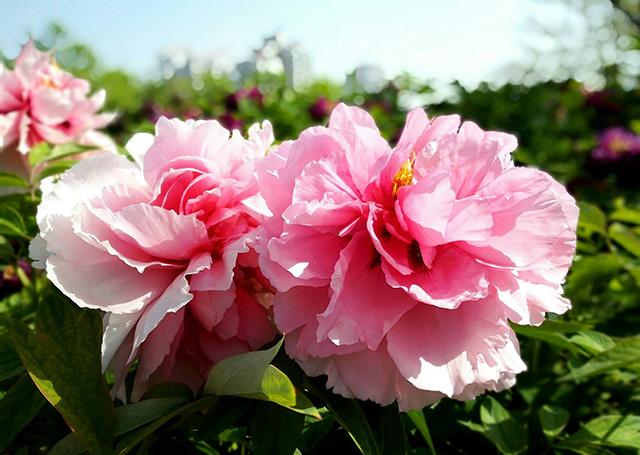 Peony is native to China’s Yangtze River Basin and the Yellow River Basin provinces or hills, people found its medicinal value and ornamental value, and become wild. From the Southern and Northern Dynasties, “Yongjia Inter-continental bamboo peony” has been cultivated for 1,500 years. In the long-term cultivation process, the peony has undergone variability, and many varieties with large colors and flowers have appeared, which have been paid more and more attention by people. The cultivation scope has been expanded from the provinces of the Yangtze River and the Yellow River Basin to the whole country.

The lotus is the flower of a gentleman. According to historical records: As far back as more than 2,500 years ago, Wu Wangfu had once visited the lotus in Lingyan Mountain (now Wu County, Jiangsu Province) on the shore of Taihu Lake, and enjoyed the lotus flower in the West. It can be said that it is the earliest record of artificial bricklaying. Lotus ponds everywhere in the north and south have been everywhere.

The rose flower is called the Queen of Flowers, also known as “Moon Moon Red”. It is an evergreen, semi-evergreen low shrub. It blooms in all seasons, usually red, or pink, occasionally white and yellow, and can be used as an ornamental plant. Can be used as a medicinal plant, also known as the rose. There are three natural varieties, modern rose flowers are diverse, with single and double petals, as well as high-heart curling and other beautiful patterns; its colorful and rich, not only red, pink, white and other monochrome, but also mixed colors , silver edge and other varieties; most varieties have aroma. There are many varieties of Chinese rose, there are nearly 10,000 species in the world, and there are more than a thousand species in China. 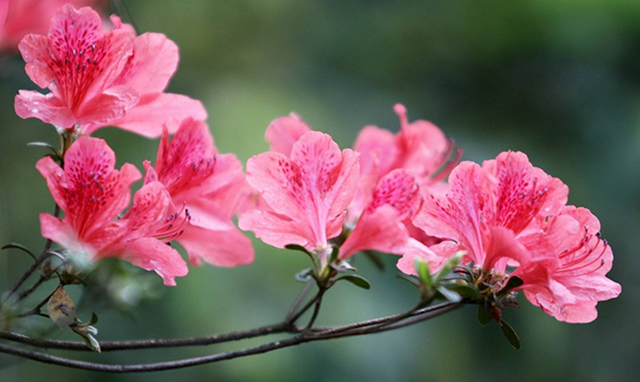 Azalea, also known as Azalea, Pomegranate, is an evergreen or plain green shrub. According to legend, there are ancient cuckoo birds, wailing day and night and hemoptysis, dyed red flowers all over the mountain, hence the name. Azaleas generally bloom in spring, with 2-6 flowers per cluster. The corolla is funnel-shaped, with red, red, apricot, snow, white, etc., and the flowers are gorgeous. Born in the mountain sparse or pine forest at an altitude of 500-1200 (-2500) meters, it is a typical acidic soil in south-central and southwestern China.

7.Camellia – the most beautiful flower 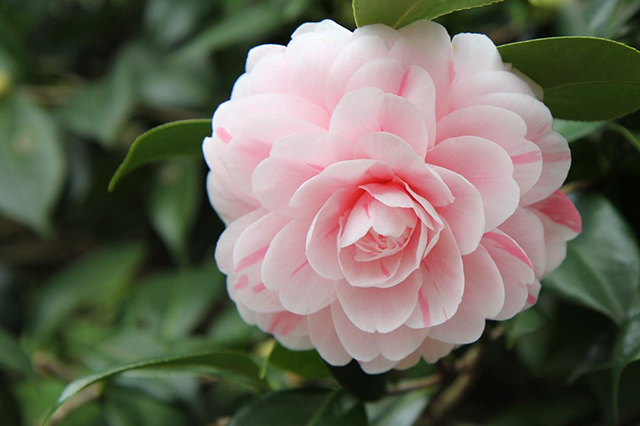 Camellia, also known as camellia, is a generic term for a variety of plant and horticultural varieties of Camellia and Camellia. The petals are bowl-shaped, divided into single or double petals, and the single-flowered camellia is mostly the original flower species, and the petals of the double-flowered camellia can be as many as 60 pieces. Camellia has different degrees of red, purple, white and yellow flowers, and even color-spotted camellia, and the flowering branches can reach up to 4 meters. Sexually warm and humid environment. The flowering period is long and is open from October to May of the next year. The flowering period is usually from January to March. Because of its beautiful shape, the leaves are thick green and lustrous, and the flowers are colorful and colorful, which is cherished by the world horticultural community. There are many varieties of Camellia, which are traditional Chinese ornamental flowers. It ranks eighth among the “Top Ten Famous Flowers” and is also one of the world’s most valuable flowers and trees. It is native to eastern China and is widely grown in the Yangtze River Valley, the Pearl River Basin, Chongqing, Yunnan and Sichuan, North Korea, Japan, Taiwan, and India.

8.Orchid – the flower of the gentleman

The orchids in traditional Chinese famous flowers refer only to several kinds of native orchids distributed in Chinese orchids, such as Chunlan, Whelan, Jianlan, Molan and Hanlan, which are commonly referred to as “China Lan”. This kind of orchid is very different from the colorful tropical orchids. It has no striking glamour, no huge flowers and leaves, but it has a simple and quiet style, elegant and elegant, which is in line with the aesthetic standards of the Orientals. There is more than a thousand years of cultivation history in China.
Chinese people have always regarded orchids as a symbol of high purity and elegance, and juxtaposed with “mei, bamboo, and chrysanthemum”, collectively known as “four gentlemen.” Usually, the “Lanzhang” is used to describe the beauty of poetry and the “Lanjiao” is the true meaning of friendship. There are also borrowed Lan to express pure love, “the gas is as long as the Lancome does not change, the heart is not moved,” and “seeking the confession of the confidant, a chat and a dream.” In May 1985, the orchid was rated as one of the top ten famous flowers in China. 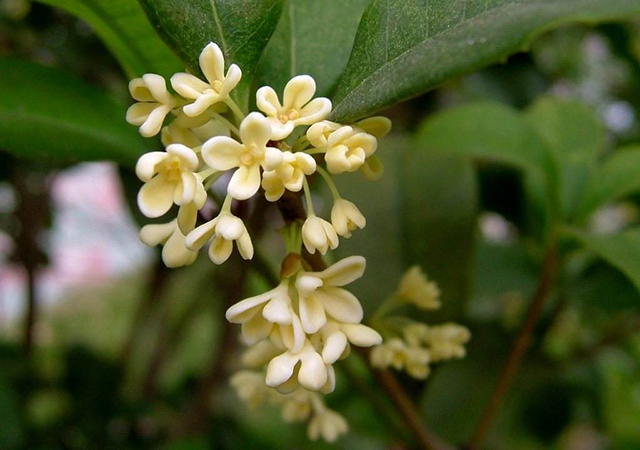 Osmanthus fragrans is the name of many trees of the Chinese genus Osmanthus, representing the species Rhinoceros (scientific name: Osmanthus fragrans (Thunb.) Lour.): aka, laurel, Oleaceae evergreen shrub or small tree, thin and thin, long The elliptical surface is pointed at the tip, opposite to the living, and does not wither through the winter. Peanut leaves, corollas and four-lobed, small shape, a variety of horticultural species, the most representative are Jingui, Yingui, Dangui, Laurel and so on.
Osmanthus fragrans is one of the top ten famous flowers in China. It is an excellent garden tree with both ornamental and practical functions, which combines greening, beautification and fragrance. The sweet-scented osmanthus is extremely dusty and rich, and it is a must. Especially in the mid-autumn season, Conggui is in full bloom, and at night, when the round is round, the wine is rewarded with gui, and the fragrance of Chen Xiang is refreshing. In the poems of ancient Chinese poems, the number of works by Gui Gui is quite considerable. It has been loved by Chinese people since ancient times and is regarded as a traditional flower.

10.Narcissus – the most beautiful fairy

Narcissus is warm, moist and well drained. It has a history of more than a thousand years of cultivation in China. It is a traditional ornamental flower and is one of the top ten famous flowers in China.
The earliest reliable document describing the introduction of narcissus into China is a passage in the section of the North Road of the section: “Sun Guangxian continued to squat, engaged in Jiangling Day, and hosted Fans Musi Mi to taste the number of narcissus flowers, picking water In the middle of the year, it is not waning.” It is said that the Persian Musmi, who lived in Gangneung, gave Sun Guangxian some daffodils. Sun Guangxian was an important lyricist of the Huan School of the late Tang and Five Dynasties. At that time, he served in Jiangling, which was under the jurisdiction of the Gaoping Xingnanping State. Jiangling was equivalent to Jingzhou in Hubei. Therefore, it is almost certain that the Chinese narcissus was indeed introduced by foreign countries. At the end of the Tang Dynasty in the fifth or earlier period, the first place may be in the Jingzhou area of Hubei. The image of Qu Yuan’s bank and the Greek legend of Narcissus, a water-side narcissistic god, is quite similar. At that time, the immigrants of the narcissus came to the country to follow the custom, and the narcissus was the hometown of Chu. The local name of Qu Yuan is used to replace this Western name. This should be the source of the Chinese name of Narcissus.