China has a long history of ancient times, and there are many historical celebrities and many famous paintings. China’s top ten famous paintings are a monument to the history of Chinese art. The great works of Chinese civilization are flowing history and silent movements; bearing the unique artistic temperament of the ancient oriental people; using color to record the long history of China’s 5,000 years of history and the cross Miles of the beautiful rivers and mountains.
The Top 10 Famous Chinese Paintings in Ancient China are: 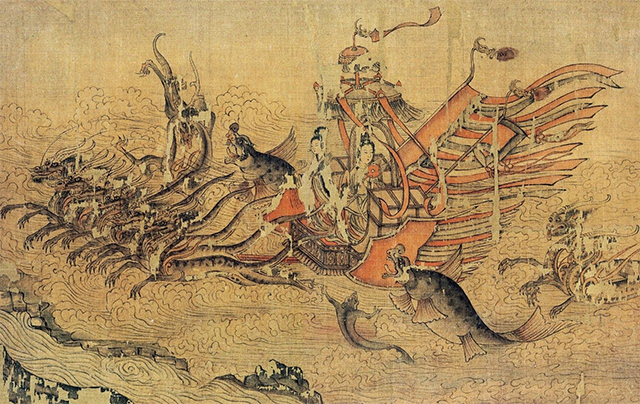 “Luo Shen Fu Tu”, the treasures of the Palace Museum in Beijing. 27.1 cm in length and 572.8 cm in width.
The original “Luo Shen Fu Tu” volume, painted by the famous painter Gu Kaizhi of the Eastern Jin Dynasty (Song imitation), this painting is based on Cao Zhi’s famous “Luo Shen Fu”, which is the masterpiece of Gu Kaizhi. This volume of Song dynasty retains some of the characteristics of Gu Kaizhi’s art to a certain extent. Under a thousand years, you can also look at his brush and ink. The whole volume is divided into three parts, and the twists and turns are meticulously and hierarchically depicting the true love story of Cao Zhi and Luo Shen. The characters are arranged in a dense and dense manner, alternating, overlapping and exchanging in different time and space, and in the depiction of mountains and rivers, all of them show a kind of space beauty.
The whole painting is simple and simple, just like “spring silkworm silking.” The mountains and rivers and stone paintings are simple and childlike. The so-called “people are bigger than mountains, and water is not allowed to be spread”, which reflects the characteristics of early landscape paintings.
This scroll is worthy of one of the treasures of Chinese classical painting, in terms of content, artistic structure, character shape, environmental depiction, and the form of ink expression. 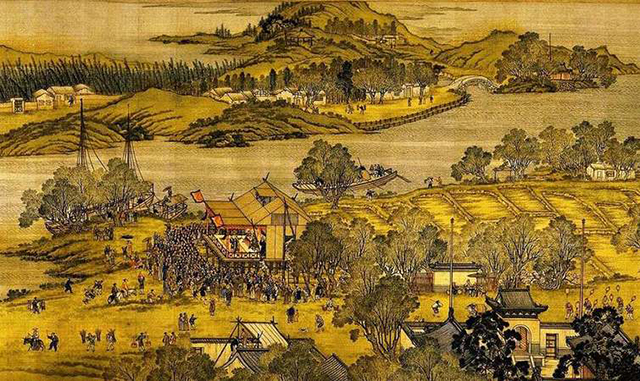 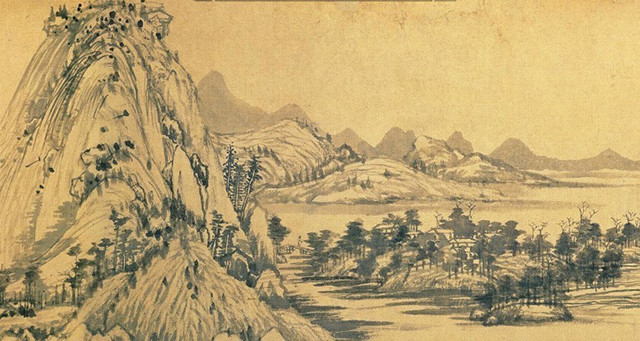 “Fuchun Mountain Residence”, 33 cm in length and 636.9 cm in width. It was first painted in Zhizheng for seven years (1347) and completed in Zhizheng for ten years. The painting was burned in the Shunzhi period of the Qing Dynasty. It was broken into two sections. The first half of the scroll was separately installed and re-named as the “Land of the Mountain”. It is now a museum in Zhejiang Province. Known as the “treasure of the town hall” of the Zhejiang Museum. 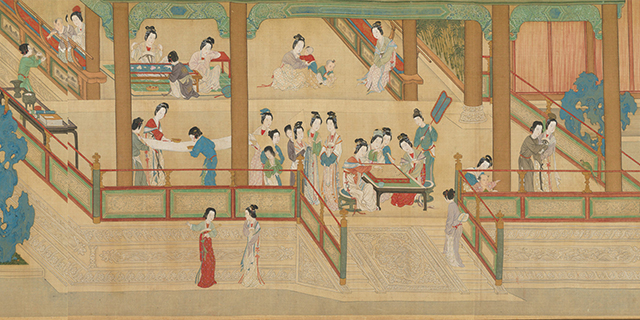 The National Palace Museum in Taipei is now in existence.
“Han Gong Chun Xiao Tu”, the first long scroll of Chinese heavy color ladies. It is a heavy color with a large size, 37.2cm × 2038.5cm, which is a giant system for decorative painting. Han Gong Chun Xiao is a traditional theme of Chinese figure painting, mainly depicting the life of the palace.
Qiu Ying was one of the representative painters of the Ming Dynasty. In his paintings, Qiu Ying was generally only titled. Qiu Ying is known as the “Golden Lady” in painting, and “Han Gong Chun Xiao Tu” is an outstanding representative of Qiu Ying’s masterpiece. This picture is sketched out of the show and the color is elegant. The painter uses the grandeur of the royal garden to express the daily life of the palace with extremely gorgeous pen and ink. Not only is Qiu Yingping’s triumphant work, but also unique in China’s heavy-duty beauty paintings, leading the way.

“Hundred Horses”, the manuscript is paper, with a length of 102 cm and a width of 813 cm. Now in the National Palace Museum in Taipei.
In 1715, the Italian man Castiglione traveled to China as a missionary. He was called into the palace by Emperor Kangxi, who was attached to Western craftsmanship. He began his career as a court painter for more than 50 years. In the creation of paintings, Lang Shining blends Chinese and Western techniques into one, forming a fine and realistic effect and creating a new style of painting, which is deeply influenced by Kangxi, Yongzheng and Qianlong. “Hundred Horses” is one of his masterpieces. 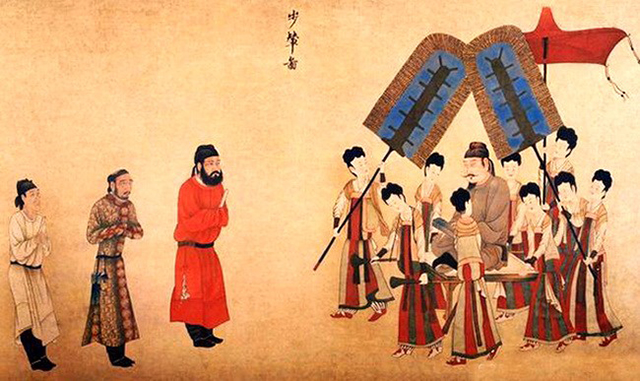 “Step Revealed Figure”, the collection of treasures in the Palace Museum in Beijing. Sakamoto, color, 38.5 cm in length and 129.6 cm in width, painted by the famous Tang Dynasty painter Yan Li, the line is fluent and expressive, and it is a work with important historical value and artistic value.
“Step Revealed Figure” is based on the historical events of the marriage of Song Zang Gambo and Princess Wencheng, the leader of the Tubo in the fifteenth year (641), depicting the scene of Emperor Taizong’s visit to the Tubo envoy of the Princess Wencheng. 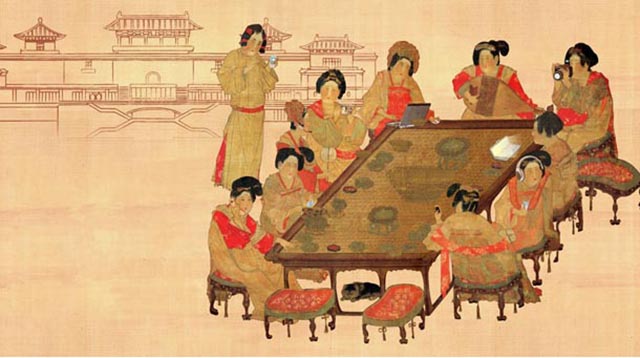 “Tang Palace Ladies”, the Tang Dynasty as the most glorious era of feudal society, is also the prosperous stage of the beauty painting. In ancient China, the portraits of the ladies and the benevolents, “the country is full of the appearance of the city, more and more sick”, the Tang Dynasty ladies paintings are known for their dignified and elegant, elegant and elegant, “Tang Palace Ladies” shows the “returning a smile and smiling” image. The aristocratic women’s life sentiment expressed by them has become the main artistic feature of the ladies’ paintings in the Tang Dynasty.

“Five Bulls”, the treasures of the Palace Museum in Beijing. 20.8 cm in length and 139.8 cm in width. The author is the famous prime minister Han Huang of the Tang Dynasty.
This “Five Bulls” is the most vivid part of Han Huang. The five strong old oxen were “personalized” in the role of the prime minister, conveying the spiritual message of focusing on reality and hard work. In 1900, the Eight-Power Allied Forces looted the Forbidden City, and the “Five Bulls” was robbed from abroad. Since then, there has been no news. In the 1950s, it was discovered by a patriotic person living in Hong Kong.
At the beginning of 1950, Premier Zhou Enlai received a letter from the patriot. The letter said that the “Five Bulls” of the Tang Dynasty Han Huang had to appear in Hong Kong. The owner of the painting had to pay HK$100,000, and he could not buy it. He hoped that the central government would pay back the national treasure as soon as possible. . Premier Zhou immediately gave instructions to the Ministry of Culture to identify the authenticity, purchase it at all costs, and instructed reliable personnel to escort to ensure the safety of cultural relics. After receiving instructions, the Ministry of Culture immediately organized experts to go to Hong Kong to identify the “Five Bulls” as true. After many negotiations, the company finally sold for HK$60,000.
When the “Five Bulls” returned to the Forbidden City, the picture was full of holes and was broken. The official museum organized experts and it took several years to repair it. Let today’s people have the privilege of seeing this “Five Bulls”, which uses the fineness of the pen, the depiction of the gods, the horrible state of the cow, and the desire to come out. Its preciousness lies in the fact that most of the ancient Chinese people who lived in this world are flower and bird figures, and those who enter the painting with cows, and so vivid, “Five Bulls” is an orphan.

“Han Xi Zai Night Banquet”, the treasures of the Palace Museum in Beijing. The scorpion is 28.7 cm long and 335 cm horizontal. It was made by Gu Hongzhong, a five-generation great painter, depicting the scenes of the Nantang giant Han Xi’s family feasting in a series of long scrolls. The pen is fine and round, and the color is rich and colorful. The characters are Qingjun and Juanxiu, and they are famous in China and abroad. It is the most outstanding masterpiece in the figure paintings of the Five Dynasties.

“A Thousand Miles of Rivers and Mountains”, the treasures of the Palace Museum in Beijing. It is 51.5 cm long and 1191.5 cm horizontal. It is a green and green landscape painting of the Northern Song Dynasty in China. Author Wang Ximeng. Wang Ximeng was a student of the Northern Song Dynasty Painting Academy at the age of 18. After he was called into the banned Chinese library, he was personally taught by Emperor Huizong of the Song Dynasty. After half a year, he created the “A Thousand Miles of Rivers and Mountains”. It is a good young painter who is genius and unfortunately dying.