China is known as the “foundation madness”, and in the past few decades, various infrastructure construction has gradually improved. Among the world’s ten longest sea-crossing bridges, China has five seats, which is awesome for China’s engineering. Today I will introduce you to top 10 cross-sea bridges in china, projects and rankings. Let’s take a look at what they have. 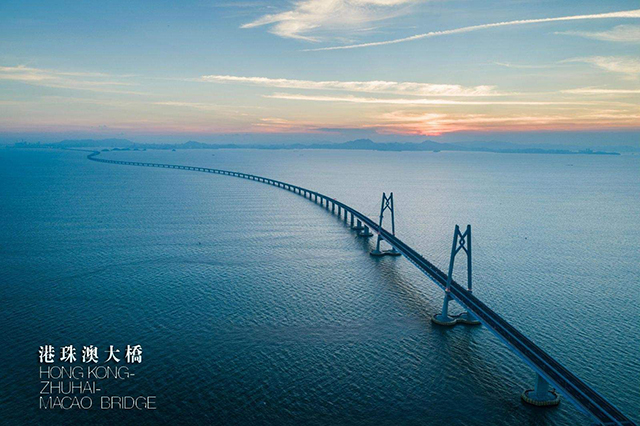 Which is the longest cross-sea bridge in China? The answer to the online search is the Qingdao Bay Bridge, but now the Hong Kong-Zhuhai-Macao Bridge has been built and has become China’s and the world’s longest. The total length of the bridge and tunnel is 55 kilometers, including 29.6 kilometers from the main bridge and 41.6 kilometers from the Hong Kong port to the Zhuhai-Macao port. Upon completion, the Hong Kong-Zhuhai-Macao Bridge will not only be the largest in China’s longest cross-sea bridge, but will also be the longest cross-sea bridge in the world.
The Hong Kong-Zhuhai-Macao Bridge connects Hong Kong, Zhuhai and Macau. It is connected to the Hong Kong Special Administrative Region in the east and Zhuhai City and Macao Special Administrative Region in the west. It will strengthen the transportation links between Hong Kong and the west bank of the Pearl River, drive the economic development of the west bank of the Pearl River, and give full play to the advantages of Hong Kong and Macao. The bridge was jointly funded by the Central Government and the governments of Guangdong, Hong Kong and Macao. The total cost was 126.9 billion yuan.
Among them, the immersed tunnel part of the bridge submarine tunnel is the longest road immersed tunnel in the world and the only deep buried immersed tunnel in the world. 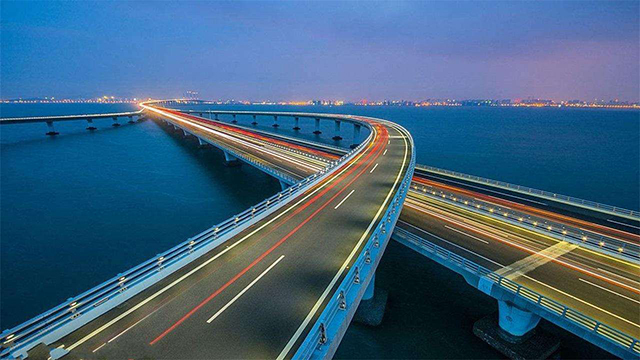 The Qingdao Bay Bridge is also known as the Jiaozhou Bay Bridge. The bridge starts from Haier Road, the main city of Qingdao, and passes through Hongdao to Huangdao. The total length of the bridge is 36.48 kilometers, of which the length of the sea section is 25.171 kilometers. The bridge was started on December 26, 2006. It was opened to traffic on June 30, 2011. It was completed in 4 years and the total investment is nearly 10 billion.
The entire Bay Bridge project includes the Suikou, Hongdao and Dagu River channel bridges, the maritime non-communication bridge and the road approach bridge, the Huangdao cross-station connection project and the Hongdao connecting line project, the Licun River intercommunication, the Red Island Interchange and Qingdao and Hong Island and Huangdao three main line toll stations and management facilities.
After the completion of the Bay Bridge, it will bring more close and convenient links to the transportation between the two major cities of Jinan and Qingdao in the province. Give full play to Qingdao’s leading position in the economic development of Shandong Province, further accelerate the construction of the Shandong Peninsula urban agglomeration and promote the development of tourism in Jiaodong Peninsula.

The Hangzhou Bay Bridge spans from Zhengjiatun, Haiyan, Jiaxing City, Zhejiang Province, to Cixi Waterway Bay, Ningbo, with a total length of 35.673 kilometers, of which the sea section is 32 kilometers long. The bridge started construction on June 7, 2003 and was officially opened to traffic on May 1, 2008, with a total investment of 11.8 billion yuan.
For the first time, the bridge construction introduced the concept of landscape design. With the aesthetic concept of “long bridge lying wave”, it presents a S-shaped curve with high ornamental and tourist attractions. The sightseeing ticket is 100 yuan.
After the abbreviation of Hangzhou Bay Bridge, the distance from Zhejiang Ningbo to Shanghai Xinzhuang is only 179 kilometers, shortening by 120 kilometers, which also relieves the pressure of the already crowded Shanghai-Hangzhou-Ningbo Expressway, forming a two-hour Shanghai-Zhejiang-centered Shanghai. In the traffic circle, the toll is 80 yuan. In the long run, it will promote the economic development of Hangzhou and the whole of Zhejiang Province.

The Donghai Bridge starts from Luchao Port in Pudong New Area, Shanghai, and is connected to Hulu Expressway in the north. It crosses the northern part of Hangzhou Bay in the south and directly reaches Xiaoyangshan Island in Qixian County, Zhejiang Province, with a total length of 32.5 kilometers. The Donghai Bridge is 31.5 meters wide and is divided into upper and lower double decks with 6 lanes in both directions and a design speed of 80 kilometers per hour. The bridge’s largest main airway, up to 40 meters from the sea, is equivalent to 10 stories. The vehicle charge is 20 yuan per trip. The bridge was officially started on June 26, 2002. It was officially opened to traffic on May 25, 2005, with a total cost of 7.11 billion yuan.

Zhoushan Jintang Bridge, located in the gray sea area between Zhoushan Jintang Island and Ningbo Zhenhai, is the longest of the five bridges in Zhoushan Island Project, with a total length of 26.54 kilometers, of which the sea part is 18.27 kilometers long. The Jintang Bridge officially started construction in April 2006 and was officially opened to traffic on November 22, 2009, with a total investment of 7.7 billion yuan. Moreover, during the construction period, two super typhoons were attacked, and the bridge that was in the frame period was safe and sound.

The Xiamen Zhang Cross-sea Bridge is located at the mouth of the Jiulong River. It is connected to the Zhangzhou Taiwanese Investment Zone and the Xiamen Haishu Investment Zone in the north and the Zhangzhou Development Zone in the south. It is 11.7 kilometers long, including 9.2 kilometers of the main bridge. The bridge started construction on November 17, 2008 and was opened to traffic on May 28, 2013, with a total investment of 4.986 billion yuan. The bridge is a standard 6-lane highway with a design speed of 100 km/h. The charge period is initially set at 15 years and the single charge is 25 yuan.
The Xiamen-Zhanghai Bridge has become a landmark building in the Xiamen-Zhanghai area. After completion, Xiamen, Haishu and Zhangzhou Development Zones will take a key step to obtain good regional economic and social benefits.

Xiamen Haicang Bridge is located in Xiamen West Port, an east-west bridge between Haitang Peninsula and Xiamen Island. It is 5926 meters long, 36 meters wide and 4A level scenic spot. It is the first three-span full-floating just box girder suspension bridge in Asia. It is the representative of the Chinese bridge in the 20th century. After the completion of the bridge, the transformation of Xiamen island-type cities to bay-type cities was promoted, and Xiamen districts were closely interacted. It was started in December 1996 and completed in December 1999. It completely radiates the East Coast Scenic Area and Taiping Mountain Villa.

Zhanjiang Bay Bridge is the first cross-sea bridge in Guangdong. It started from Huangpu Town of Wuchuan City and finally has 3,981 meters of Leshan Avenue in Zhanjiang. It is the largest bridge project after the Humen Bridge in Guangdong. The bridge started construction in July 2003 and was completed in December 2006. It invested 1.2 billion yuan and can reach the 12-class typhoon and the 8th-level earthquake. The stability can be seen in the construction technology. The bridge is like a dragon and a dragon lying on the slanting bay. It is full of people, free to play all day, and the scenery is not limited to the changes of the four seasons.

The Pingtan cross-sea bridge is connected between Haitan Island and the mainland. Due to the abnormal relationship between the two sides of the strait, the economic development of Pingtan in Fujian is affected. After the completion of the bridge, the economy of Pingtan County will grow with the mainland. The bridge started construction in 2006 and was opened to traffic in 10 years. It is 660 meters long and 17 meters wide. After completion, Pingtan County has 8 first-level, 23 second-level and 97 third-level scenic spots can be further developed. At the same time, promoting trade with Fujian and even the mainland has a positive effect on the reunification of the motherland.