China’s ancient town culture is full of yearnings. Among the many ancient towns in China, these are the 10 most charming ancient towns. Their unique geographical location and cultural atmosphere have created their different status in people’s minds.Top 10 charming Ancient Towns in China are these： 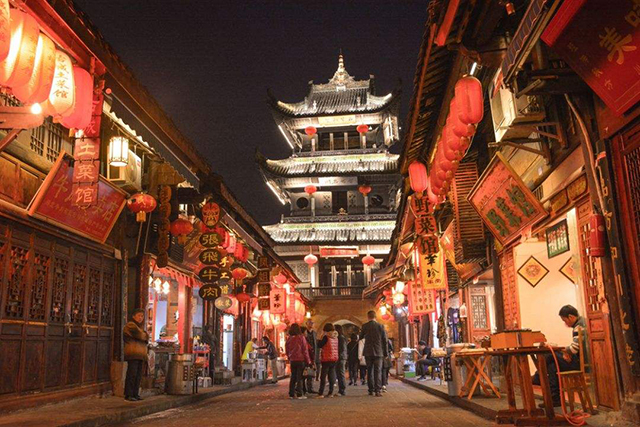 Hemu Village is a village under the jurisdiction of Burqin County, Xinjiang Uygur Autonomous Region. Located on the shore of Kanas Lake in Burqin County, Xinjiang, it is the concentrated living place of the Tuva people. It is the farthest and largest village among the only remaining Tuva villages (Hemu Village, Kanas Village and Baihaba Village).
The houses in Hemu Village are all made of logs and are full of original flavor. The most famous is the intoxicating autumn colors of Wanshan Red, and the smoke rises in the autumn colors, forming a dreamy smoke belt, which is better than a fairyland. On the hillside around Hemu Village, you can overlook the panoramic view of Hemu Village and Hemu River: ghosts in the empty valley, small bridges and water, and the Wranglers are passing through the forest.

If you want to experience the Dong culture, Chengyang Village is a very good place. The group has 8 villages and is about 5 hours drive from Guilin. These villages are famous for their folk culture-the villagers hold twice a day. Cultural performances-their wooden wind and rain bridge is one of the most famous buildings in China, surrounded by rice fields and other crops.

Hongcun Ancient Buildings is located 11 kilometers northeast of Jixian County, Huangshan City, Anhui Province, and is a Huizhou residential building complex during the Ming, Qing and Republican periods. The protected area is 280,000 square meters, there are 103 buildings in the Ming and Qing Dynasties, and 34 buildings in the Republic of China. Hongcun is surrounded by mountains on three sides and faces south. The Huizhou architecture of Hongcun has profound humanistic connotations. The representative buildings include Nanhu Academy, Lexuetang, Chengzhitang, and more than 100 houses in the Ming and Qing Dynasties.

Zhouzhuang is a small town in the south of the Yangtze River. It has the reputation of “China’s first water town” and is the first batch of 5A scenic spots in the country. Zhouzhuang was founded in 1086 (the first year of the Northern Song Dynasty Yuanyou), and was named after Mr. Zhou Digong donated the land to repair the temple. In the Spring and Autumn Period, the seal of the land of Wu Wang Shaozi was named Yu Fengli.
Located in Kunshan, Suzhou, Zhouzhuang is one of the six ancient towns in the south of the Yangtze River. In 2003, it was named a famous historical and cultural town in China. Zhouzhuang has a long history and is a typical Jiangnan water town. It has a unique human landscape and is a treasure of Chinese water culture and Wu local culture.
More than 60% of the residences in Zhouzhuang Town are still buildings in the Ming and Qing Dynasties. There are nearly 100 classical houses and more than 60 brick-and-mortem gates in the ancient town of 0.47 square kilometers. The ancient customs of Zhouzhuang residence still exist, and 14 unique ancient bridges are preserved. . The scenic spots include: Former Residence of Shen Wansan, Fu’an Bridge, Shuangqiao, Shen Hall, Weilou, Zhouzhuang Eight Views, etc. Re-confirmed the National Health County (township) in 2018.

Fenghuang Ancient Town is located on the bank of the Shechuan River in Lianshui County. It is located in the fertile delta of the “cross-water” at the confluence of the Sanhe River exit of the Shechuan River, Zaohe Ditch and Dripou. Backed by Daliang Mountain, facing the Phoenix Mountain, there is a land of fish and rice guarded by Wuzhai. It is a famous merchant town in the county, a densely populated town, a prosperous and economically prosperous town, and a rich and prosperous town. The 307 provincial road passes through the town and has convenient transportation. The regional administration is now under the jurisdiction of Fengzhen Town, Fenghuang Town. It is a pearl in southern Shaanxi. When you set foot on the land of the ancient town, you walked into the historical gallery of the ancient town, which is a harmonious environment between people and nature. When you are there, you can see small bridges, flowing water, and people’s homes; you can taste the songs, dances, and wines; you can experience the simplicity, quietness, and elegance of Jiangnan. This is not the most lovely place in Shaanxi, but the ancient town of Fenghuang has a long history, profound cultural heritage and rich tourism resources. It has a history of 1400 years and is still well preserved. Mainly based on the courtyard, the ancient architecture generally follows the architectural style of the Hui School, which is more local.

Wuyuan Village is a rural assembly centered on old buildings. Although there are many beautiful Ming and Qing architectures, some of which are even older, dating back to the Tang Dynasty 1300 years ago, the houses are white stones with grey tile roofs. Picturesque, in fact, the entire Wuyuan area is one of China’s most famous attractions, and spring is the best time to visit: azaleas and rape blossoms, tea trees are green.

Tongli Ancient Town belongs to Wujiang District, Suzhou City, Jiangsu Province, and the town of Song Dynasty. In the town area, the gardens, temples, houses and celebrities were built in the Ming and Qing Dynasties. “15 small rivers divide the ancient town into seven small islands, and the 49 ancient bridges connect them together to Small bridges, flowing water, people are famous.

If you don’t have time to travel to Tibet, you can still feel this culture by visiting the “Jiajia Village”, a Tibetan-style village in Sichuan Province. Jiazhou is known as “Tibet Wonderland” and is considered to be the most beautiful town in China. One is built on a forest hillside, the eaves are red and the exterior walls are white.

Lijiang Ancient City is located in Gucheng District, Lijiang City, Yunnan Province, also known as Dayan Town. It is located in the middle of Lijiang Dam. It was built in the late Song Dynasty (late 13th century AD) and is located in the Yunnan-Guizhou Plateau with an area of 7.279 square kilometers.
The ancient city of Lijiang has a variety of local ethnic customs and entertainment activities, such as Naxi Ancient Music, Dongba Ceremony, Divination Culture, Ancient Town Bar and Naxi Torch Festival. The ancient city of Lijiang reflects the achievements of ancient Chinese urban construction and is one of the distinctive features and styles of Chinese folk dwellings.

The beautiful Yangshuo Town on the Lijiang River used to be a paradise for backpackers. As more and more people discover the beauty of the area, it has become more upscale now, especially on a misty morning where fishermen are in their In the small wooden boat, this is a good place to ride a bicycle in the countryside. Like many other travelers, you can take a boat to the Lijiang River in Guilin and then ride your bicycle back.