China has a large land and abundant resources. In this spring season, it is the most beautiful season to see flowers. These ten places are the best places to see flowers in china. 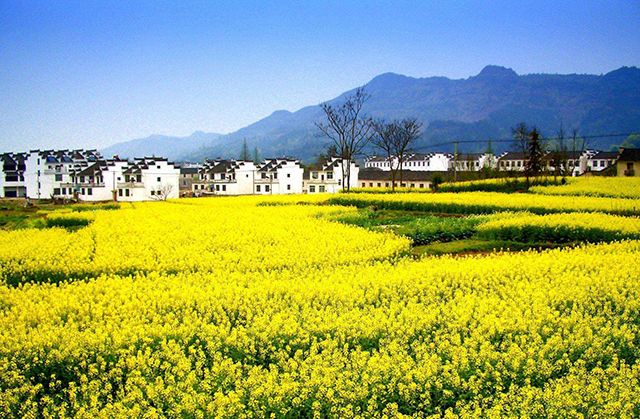 It refers to a beautiful and spectacular man-made landscape in Wuyuan County. The most beautiful season in Wuyuan is when rapeseed is open. Rapeseed has become the best green resource for sightseeing.
Jiangxi is a big province of rape blossoms. The most beautiful rapeseed flower in Jiangxi is in Jiangling and Qiling. It goes into Wuyuan Jiangling and Qiling. It is surrounded by pink peach blossoms, white pear blossoms and layered golden terraced rapeseed. The white walls and shingles of the houses reflect each other and form a beautiful natural picture. Jiangxi Wuyuan Guling is known as one of the “Top Ten Most Beautiful Terraced Fields in the World”.
The rapeseed flower of Jiangxi Wuyuan is such an artistic rhyme. Jiangxi Wuyuan is known as “the most beautiful country in China”. Yu Shao Shiyun: “The rape blossoms are full of rehmannia, and the butterfly dance bees are busy; the breeze blows the golden waves, and the fragrance is full of intoxicating fragrance. “Rapeseed pollen is rich in nectar, often attracting butterflies and bees to dance in the flowers, thus adding a colorful view of the countryside. In the middle and late March, the pink peach blossoms and white pear blossoms are dotted in the golden yellow rape blossoms in the mountains, hiding the white-walled gray-waist Huizhou architecture, so that everyone who escapes from the city can find their home. 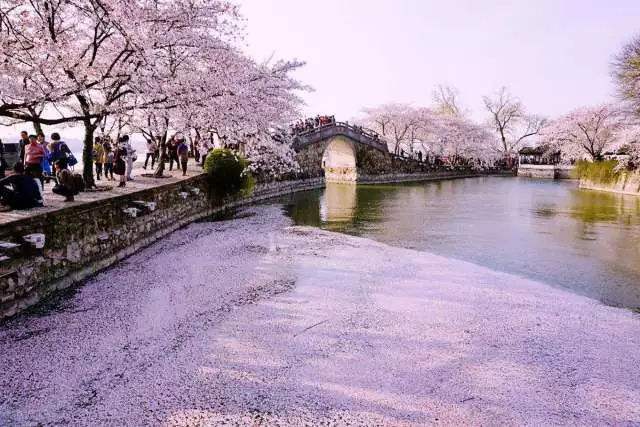 Yuantouzhu is a peninsula lying on the northwestern shore of Taihu Lake in Wuxi. It is named after the huge stone that protrudes into the lake and looks like a tortoise. Yuantouzhu has many landscapes such as Chongshan Yinxiu, Luding Yinghui, Yuanzhu Chuntao, Hengyun Mountain Villa, Guangfu Temple, Taihu Xiandao, Jiangnan Lanyuan, Sino-Japanese Sakura Friendship Forest, and so on. Taitou Lake Yuantouzhu Scenic Area has become a tourist resort.
Yuantouzhu has a landscape called Changchun Huayi. When the cherry blossoms are in full bloom in March and April, the people walk in the paintings. When the scenery falls, a breeze blows, and the cherry blossoms fall into the pond next to it. With the microwave forming a burst of lianyi, the scenic area is because of the cherry blossoms. Named after it, named Changchun Huayi. 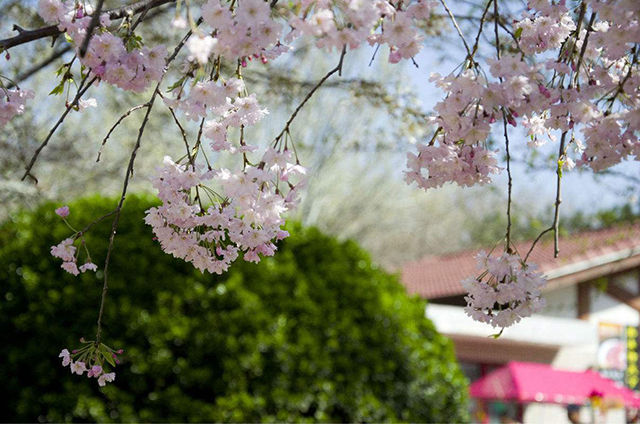 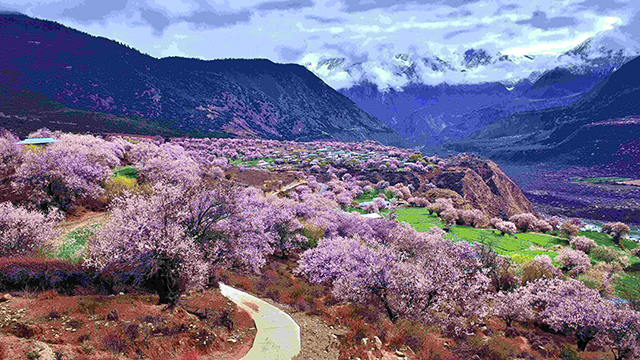 The Nyingchi area is known as the Jiangnan area of Tibet. The Peach Blossom Culture Tourism Festival is a big business card for the development of tourism in the Nyingchi region. It started in 2002 and has been successfully held.
The peach blossoms in the Nyingchi region are the peach blossoms on the plateau. The peach blossoms in the Nyingchi region are different from those in the south of the Yangtze River. The scientific name is “Light Walnut”, also known as “Tibet Peach”, commonly known as “Wild Peach”. The trees are high in flowers and wild. The light walnut tree is tall and has a life span of more than a thousand years.
Linzhi Peach Blossom has its own counties, generally opening in the village of Gula in the Bayi District, traveling to Gongbu Jiangda County in the north, Milin County and Bomi County in the south, among which the Duodu Town of Bomei County The Taohuagou of Muxiang stretches for 30 kilometers and is known as the longest peach blossom ditch in China. 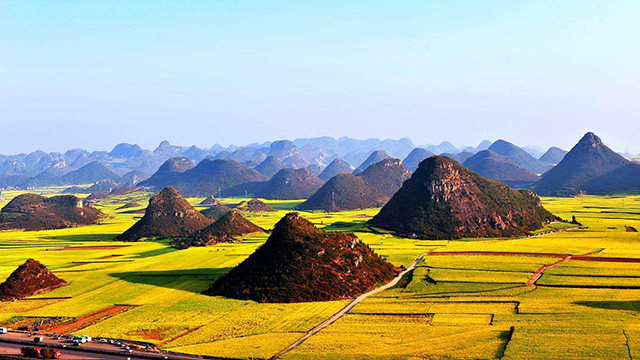 Luoping rapeseed refers to a beautiful and spectacular man-made landscape in Luoping County, Qujing City, Yunnan Province. In Luoping, the main thing is to shoot rapeseed, play Jinji, Niujie, Duoyi River and Jiulong Waterfall. The annual Luoping Rape Flower Tourism Festival in Yunnan will make you feel the harmony between man and nature and enjoy the picturesque scenery.
Generally recommended is the Jinjifeng in the northeast of the county. Boarding the Jinjifeng, the rapeseed field is relatively flat, and some lonely peaks are pulled up a little further, which is very magnificent. Many photos of Luoping Huahai are taken here. 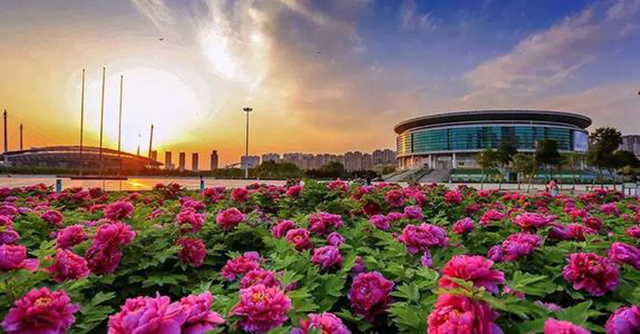 Luoyang Peony, “Only the peony is the national color, when the flowers bloom, the city is moving”, it is a perennial deciduous shrub. Luoyang is the ancient capital of the 13th Dynasty and has the reputation of “the Millennium Emperor, Peony City”. “Luoyang is the most suitable flower, and the peony is especially wonderful in the world.” Its cultivation began in the hustle and bustle, and it was in the Tang Dynasty. It is graceful, luxurious, and fragrant, embellished with prosperity and prosperity. It is a symbol of the prosperity and happiness of the Chinese nation.
Luoyang peony flowers are huge, with a wide variety of colors, and there are 9 colors, 10 patterns and more than 1000 varieties of red, white, pink, yellow, purple, blue, green, black and complex colors. During the flower season, the Luoyang City flower sea crowd, competing for the peony Qiangzi Fangrong.

In the spring of March, in Yinzhai Village, Panjiang Town, Guiding County, Guizhou Province, the golden rapeseed flower of Wanmu is like Jinhai. The plum blossoms and pear blossoms are like snowy mountains. They are intertwined and are known as “Jinhai Snow Mountain”. “.
Every household in Yinzhai has planted Lishu on the hillside behind the house. Every spring, from the sound of the village, the mountains are close to each other, and the white flowers are everywhere. This is the well-known Panjiang Crisp Lizhi flower. It is in sharp contrast with the golden yellow rape blossoms on the banks of the Yinzhai River. The white and yellow flowers complement each other. The pink peach blossoms are interspersed with the emerald green trees against the bottom. The clothy cottages are faintly faint, gorgeous colors. The scenery, gorgeous temperament, 10,000 acres of rapeseed and thousands of plums and flowers are woven into the “Golden Sea Snow Mountain” wonders. 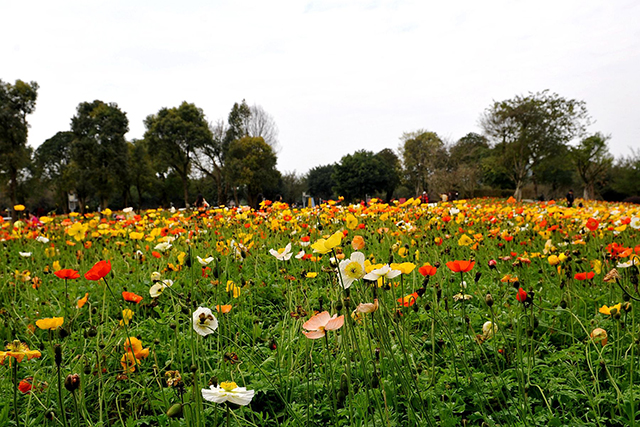 The reputation of Guilin Huahai is outside, and all kinds of activities about flowers are popular among you. Guilin Garden Expo has introduced corn poppy since 2016, and a large piece of corn poppy has created a flower sea effect, attracting many tourists to come and watch. Xishan’s boutique lotus flower exhibition. In addition, there is the cherry blossom season in Nanxi Mountain, and the citizens of the Guilin Garden Botanical Garden, which enjoys the golden autumn and enjoy the laurels, and they all have a strong appeal among the citizens. 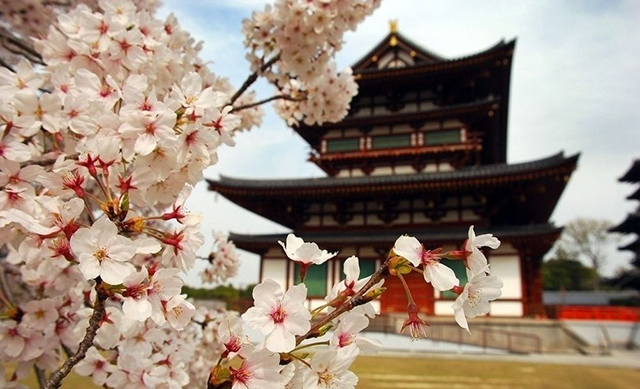 Xi’an Qinglong Temple is located in Leyouyuan, in the southeast of the city. In 1986, when the Qinglong Temple was built in the Japanese monk air sea monument, a cherry tree planted by Japanese friends and Buddhist associations, symbolizing friendship and peace, was implanted in the monastery. Every March in the spring, the cherry blossoms in the temple are in full bloom, and the spring is full of round and colorful, attracting many domestic and foreign tourists to come and watch the spring atmosphere.
More than 600 cherry blossoms in the temple are usually divided into three periods in the one-month flower season. The fresh and elegant “Yoshino Yoshino” and the elegant “Yang Guifei” are here. These familiar cherry varieties are everywhere here. Among them, there is something interesting and cozy. 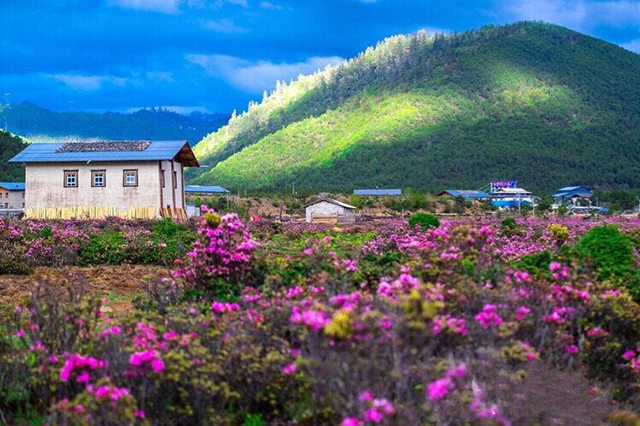 Pudacuo National Park, located in the “Three Parallel Rivers” World Natural Heritage Center in northwestern Yunnan, consists of two parts: the International Important Wetland Bitahai Nature Reserve and the Duhu Scenic Area of the Haba Area of the Three Rivers Parallel World Natural Heritage. It is also one of the main attractions of Shangri-La tourism, with the Bita Sea, the Tudu Lake and the Miritang subalpine pasture as the main components.
The Pita Sea in the Pudacuo National Park is famous for its azalea trees. Every May and June, the rhododendrons bloom and the petals fall into the lake. When the fish eats, they will turn their belly and float to the surface. “. Bitahai is the last attraction of Pudacuo, and the longest tour time is about 2 to 3 hours. Usually tourists bring their own food.