Beijing is a political and cultural center of China and a historical city. The ancient streets all over Beijing are a symbol of culture and can also be used to appreciate the unique charm of Beijing. These ancient streets also have their own different characteristics.Top 10 Ancient Street in Beijing are these: 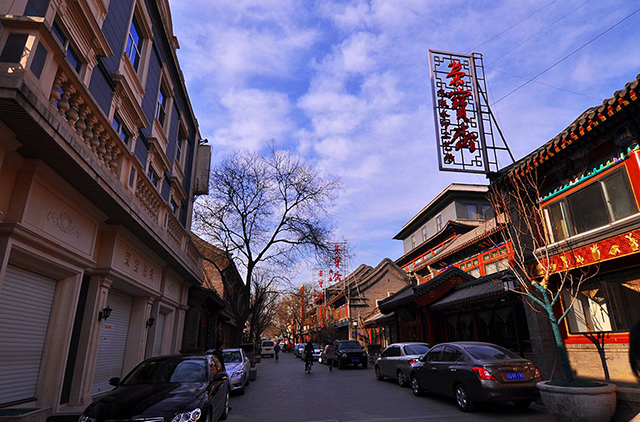 One of the top ten ancient streets in Beijing. It is said that the scholars of the Qing Dynasty came to Beijing to gather here, and a cultural street was formed over time. There are many shops specializing in antique calligraphy and painting, and even foreigners often come here. 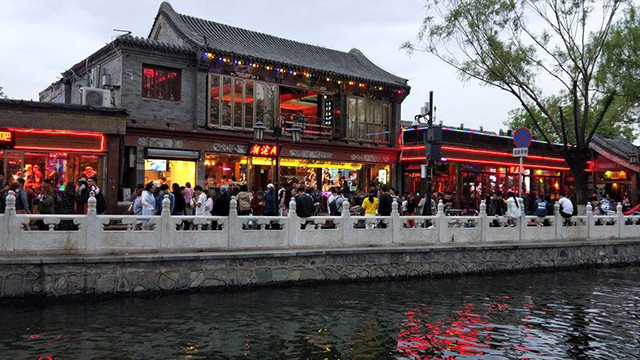 There are many bars in this street, and this is also the characteristic of this street. There is a sense of quietness in the middle of nowhere. The Beijingers pay attention to the atmosphere. Drinking here is an atmosphere and a pleasant experience.
Houhai is an integral part of Shichahai. Shichahai, which consists of three waters of Qianhai, Houhai and Xihai, is called “the last three seas” in order to distinguish it from the “three seas” of the North Sea, the Central Sea and the South China Sea. Houhai East rises from Dimenwai Street, west to Xinjiekou Street, south to Ping’an Avenue, north to North Second Ring Road, with a total area of 146.7 hectares, including 34 hectares and green area of 11.5 hectares. This is the ancient waters of the Yuan Dynasty in the city of Beijing in the 700 years.
If Sanlitun Bar Street is a popular card, then Houhai Bar Street is undoubtedly a cultural card. A small alley in the water and gathering in the sea, no noisy music, only melodious singing and the unique cultural atmosphere of the 80s. Coupled with the characteristics of the old Beijing, Houhai is definitely an alternative melodious modern city. 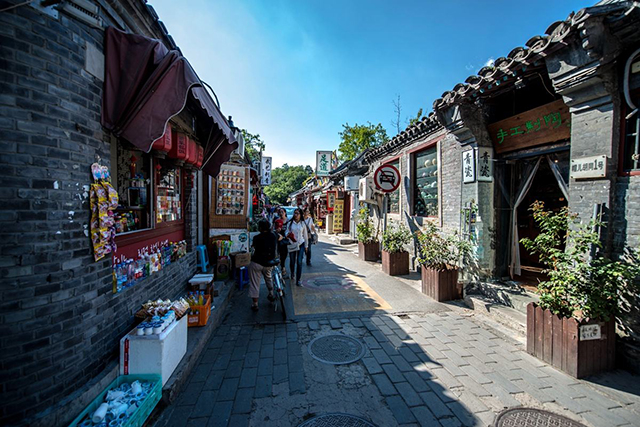 Nanluoguxiang is a hutong located in the intersection of the east side of Beijing’s central axis. It starts from Gulou East Street in the north and Pingan Street in the south. It is 8 meters wide and 787 meters long. It was built in the same period of the Yuan Dynasty. It is one of the oldest neighborhoods in Beijing and has a history of more than 740 years. It is also among the 25 old city reserves in the plan. In the Qing Dynasty, the “Full Map of Beijing” drawn in the fifteenth year of Emperor Qianlong (1750) was renamed Nanluoguxiang.
It is one of the oldest neighborhoods in Beijing. It is the only chessboard-style traditional residential area in China that preserves the Yuan Dynasty Hutong courtyard texture, the largest scale, the highest grade and the most abundant resources. It is also the most street-like street with old Beijing style. The various houses and houses in the surrounding hutongs are colorful and deep. Nanluoguxiang and its surrounding area were once the center of Yuandadu. During the Ming and Qing Dynasties, it was a place of great wealth and wealth. The streets and streets were full of ups and downs, and the palaces were numerous, until the Qing Dynasty was destroyed. The prosperity of Nanluoguxiang also slowly followed. 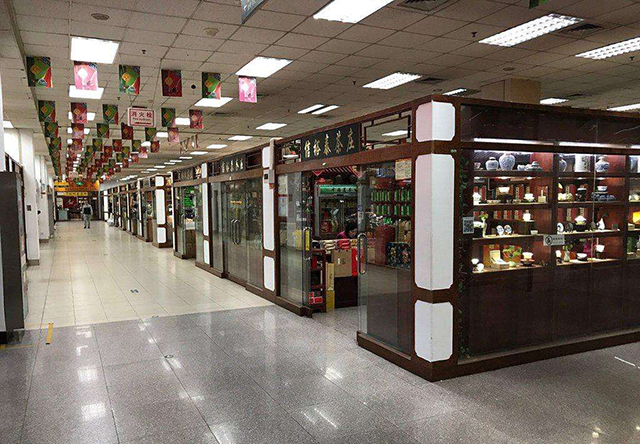 Beijing Maliandao Tea Street is located in the center of “Jingcheng Tea First Street” and is a large-scale tea market. There are more than 300 tea merchants from more than ten provinces and cities nationwide, with an annual sales of nearly 300 million yuan. In addition to tea business, it also operates tea sets, tea crafts, tea ceremony and tea culture. The unique management and standardized management have made it a strong radiation and influence in the country in just three years. He has been awarded the honorary title of “Contract-honoring and Promise-keeping Unit” and “Civilized Unit” by Beijing and Xuanwu District. 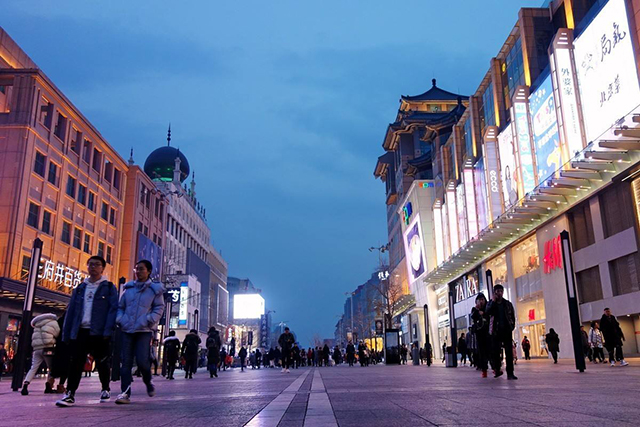 Wangfujing Walkway, located in the Dongcheng District of Beijing, from Dongdan Sanjo in the south and Jinyu Hutong in the north, is one of the four sections of Wangfujing Street, with a total length of 548 meters and a width of about 40 meters. 140,000 square meters, renovated on September 11, 1999.
Wangfujing Walkway, the main street is spacious and flat, the ground is made of red granite, the wires are all underground, the street has separate seats, and there is a trash can every 40 meters.
Wangfujing Walkway is a famous commercial pedestrian street with a history of hundreds of years and enjoys the reputation of “Golden Street” in Beijing. In 2019, the Ministry of Commerce issued the “Notice on Carrying out Pilot Work on the Renovation of Pedestrian Streets” and decided to carry out the pilot work of upgrading the pedestrian street in Wangfujing Pedestrian Street . 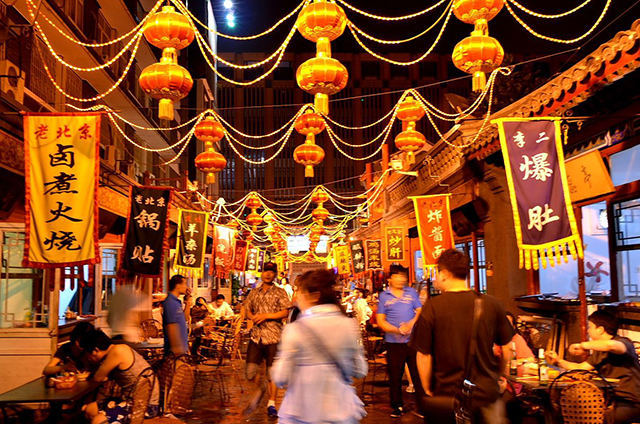 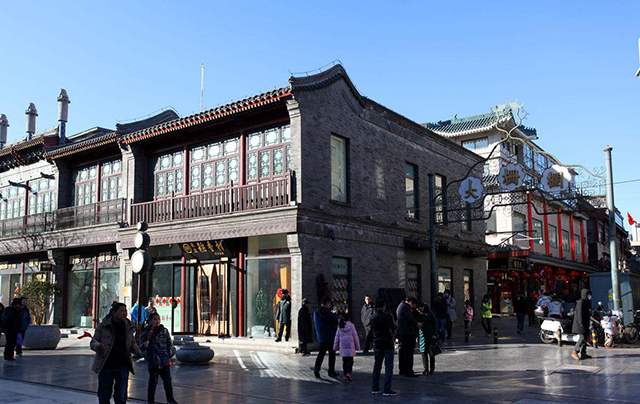 On the south central axis of Beijing, Qianmen Street has a history of more than 570 years, and is known as the “sky street”. The renovated Xinqianmen Street highlights the combination of modern business functions and the style of the ancient capital. At present, in addition to the original “home grown” Yue Shengzhai, one-stop, Qinglinchun tea, Quanjude and other 13 “old brands” all moved back, including Apple Computer, Starbucks, Rolex, Adidas and other more than 20 internationally renowned The brand has also signed up and decided to enter.
Xinqianmen Street has been hanged with old Beijing-style street lamps such as bird cages, bronze drums and candied haws. The reconstructed Qianmen Street was replaced by a blue-white stone pavement, reappearing the past royal style, and the Ming and Qing scenery such as the trams (small cars) and the five-storey buildings that existed in the memory of the old Beijingers reappeared in front of people. 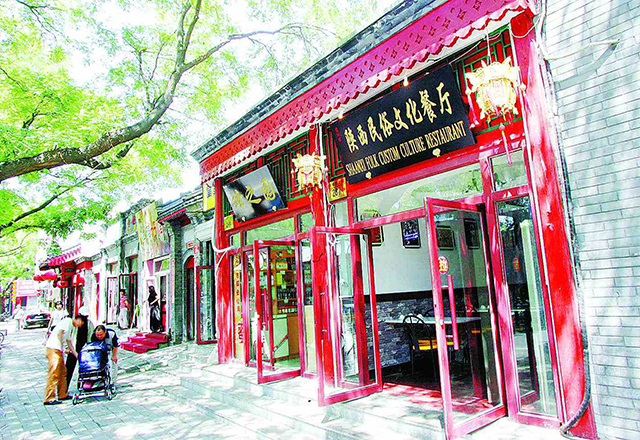 Gulou Street was once the oldest commercial district in Beijing. Since the establishment of the Yuan Dadu in 1271, according to the principle of the establishment of the “Zuozu Youshe, the former city and the city”, the Gulou Street, which is just behind the Imperial City, is the important thing of the “market”. component. Merchants gathered on both sides of the road, people flowed in the hustle and bustle, and Hutong gathered high-class courtyards of the dignitaries and heroes and ordinary people’s residences of ordinary people.
There are many old hutongs in Beijing on both sides of Gulou East Street. These hutongs are well-connected, and there are also many famous hutongs like Nanluoguxiang and Baocao Hutong. There are also a lot of small shops and places to eat. With the perfect completion of the renovation project of Gulou East Street and the arrival of many old Beijing brands, Gulou East Street also has the reputation of the old Beijing style street, and the old brands and surrounding areas. The quaint cultural atmosphere contrasts with each other, surrounded by ancient hustle and bustle. 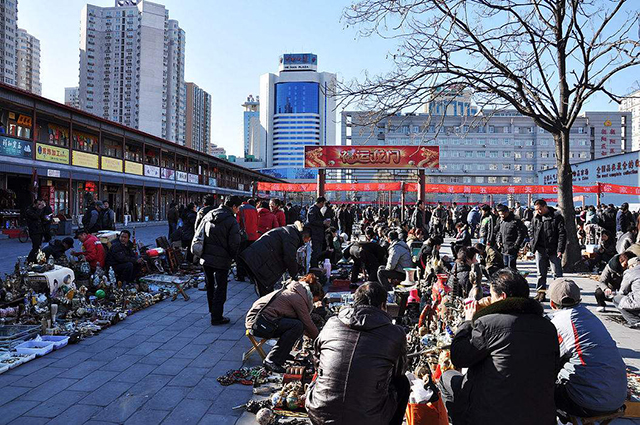 The Panjiayuan Flea Market is an extremely wide-ranging market with an area of ​​48,500 square meters. Located in the southeast corner of Beijing’s Third Ring Road, it is the largest flea market in China. Shops and sheds are open all year round. There are more than 3,000 booths in cultural relics, paintings, four treasures, porcelain and wood furniture. There are 24 provinces and cities in China. Autonomous regions, involving more than a dozen ethnic groups such as Han and Hui, have set up business here.
The main items in the market are jewellery and jade, antique furniture, four treasures of the study, ancient calligraphy and painting, old books and daily necessities. It is a great place to buy and appreciate antique junk, crafts, collectibles and decorations. The Peking University Gemological Appraisal Center in the market can issue an authority certificate or provide advice on the spot for jewellery and jade. The market is called by the news media “the country’s largest old-fashioned goods market”, “the country’s largest category of the most comprehensive collection market”, “the country’s largest collection of folk handicrafts.”
In 2004, Panjiayuan Flea Market was rated as “National Top Ten Antique Markets” by the public vote in the “First China Collections Annual Ranking Awards Conference”. On February 28, 2013, China’s well-known trademark “Panjiayuan” won the honorary title of “Beijing Top Ten Commercial Brands”. “Panjiayuan” has become the carrier of regional culture and has become a characteristic cultural symbol, a kind of local feelings. The title has become an intangible asset in the treasure house of Chinese national culture.
The Panjiayuan flea market is the cheapest flea market in Beijing. Some people say that it is like a museum. It has a long history and is known as the “ghost city”, attracting a large number of Chinese and foreign tourists. Before October 2003, it was divided into two large blocks, one was to sell porcelain and miscellaneous crafts; the other was a scattered stall selling old books in the west. The porcelain handicrafts are sold in four districts, and the second district is dominated by ancient porcelain. 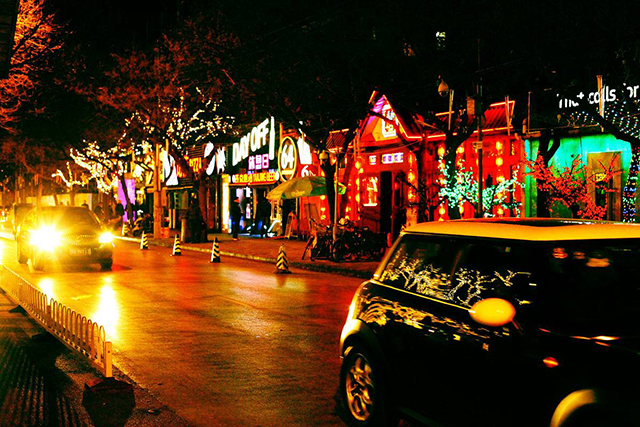 Sanlitun Bar Street, referred to as Sanlitun, is located on the east side of Sanlitun North Road, Chaoyang District, Beijing, China. It is a bar street famous for its many bars and features. The first bar was established in 1983. Because in the embassy area, many foreigners are attracted to relax here.
Sanlitun Bar Street is located on the west side of Changhong Bridge in the East Third Ring Road of Beijing. Foreigners who come to Beijing for almost all know this place. The north side of the bar street is the embassy district. Because of the great reputation of this street, some foreign embassies changed the house number in front of the house from Sanlitun Road to “Sanlitun Bar Street”. The bar street business hours are from afternoon to day. Early morning.