The Manzhouli Port is located in the western part of the Hulunbuir Prairie of Inner Mongolia, in the Sino-Russian-Mongolian triangle, bordering Russia to the north and Mongolia to the west. The international corridor is also China’s most continental road port, and it undertakes over 65% of the land transportation tasks of Sino-Russian trade. The Manzhouli Port is the only international port of the Trinity of Highway, Railway, and Air among the border ports in China, and the only land port with 24-hour customs clearance.Therefore, Manzhouli Port is the largest land port in china. 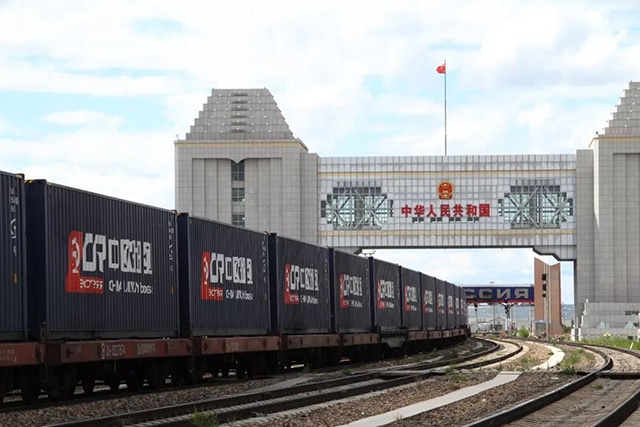 A hundred years ago, the Manzhouli area was a vast grassland, known as “Hole King Prague”. Mongolian means vigorous spring water. The customs clearance of Manzhouli originated from an unequal treaty, namely the “Sino-Russian Mutual Aid Treaty” signed between Li Hongzhang and Russia in June 1896, allowing Russia to build the Middle East Railway from Russia’s Chita to the Suifen River in China. Construction began in 1903, and foreign trade activities in the Manzhouli area gradually increased until 1908, when formal clearance was established.
At that time, the autonomy of tariffs and customs management were completely in the hands of foreigners, and customs became a tool for imperialist economic plunder. After the Revolution of 1911, the Qing government ended its rule, imperialism seized the right to collect and pay for customs duties, and China’s customs sovereignty was completely lost.
After the September 18th Incident, Japan invaded the three northeastern provinces. On June 26, 1932, the Manchuria customs clearance was accepted by the pseudo-Manchurian states, and the execution of the orders and taxes of the pseudo-Manchurian Ministry of Finance began. The defeat and surrender during the 13-year period Manchuria branch was in the dark period of Japanese rule. In the period of the liberation war, the Manchuria Office of the Ximan Military District of the Northeast Democratic Alliance took over the business jurisdiction of the Manchuria Customs. On January 3, 1949, the Manzhouli Customs Bureau under the people’s power was formally established to assume the task of supervising and levying imports and exports from China and the Soviet Union, and strongly supported the liberation of the country.
From 1952 to 1955, the import and export freight volume of Manzhouli Port ranked first in the country’s customs.
In the 1960s, due to the deterioration of Sino-Soviet relations, the work of the Manchuria Customs fell into a historically low period.
During the Cultural Revolution, the leadership system of Manzhouliguan was decentralized to the lowest point and was under the management of the Manzhouli City Revolutionary Committee.
After 1982, the Manzhouli Port became the main channel for China’s trade with the former Soviet Union.
In 1992, with the approval by the State Council of Yanbian as an open city in Yanbian, the business volume of the customs in Manzhouli increased sharply, and various tasks entered a standardized track.
In June 2002, at the National Port Customs Clearing Conference held in Shanghai, the Manzhouli Port was listed as one of the 13 priority ports for national development and priority construction. Among them, the Manzhouli Railway Port is one of the two major railway ports under construction.
In September 2013, the first “Summano” international container train departing from Manzhouli Port successfully launched.
As of October 2018, a total of 748 Chinese and European trains entered and exited through the Manzhouli Railway Port, a year-on-year increase of 15.3%; the value of goods was US $ 3.421 billion, a year-on-year increase of 25.5%.

Manzhouli is located in the northeast of the Inner Mongolia Autonomous Region. It is a planned city in the autonomous region. It is adjacent to Mongolia in the west and Russia in the north. It enjoys a high reputation as the “window of East Asia” and is China’s largest land port. The important port city for multi-field cooperation is the most convenient, economical, and most important land-sea transport channel for China’s Bohai Rim to Russia and Eastern Europe. At the same time, the port is also a port with a century-old history. The Manzhouli Port is responsible for more than 65% of the land transportation tasks of Sino-Russian trade. Foreign trade accounts for more than 80% of Inner Mongolia’s import-export trade with Russia and 13% of the country’s border trade with neighboring countries. One of the distribution centers. The General Administration of Customs and the State Ports Office of the People’s Republic of China have included Manzhouli Xijiao Airport in the “2008 Port Opening Trial Plan”, which is expected to be officially opened to the public within the year.
The Manzhouli Railway Port was opened in 1901. It is China’s largest railway port with the highest capacity. There are 51 wide-standard rail-to-hair marshalling lines, of which 24 are wide rails and 27 are standard rails; there are more than 90 lines at the port station, including replacement lines and special lines; wide-rail trains will have one station. There are more than 20 remodeling sites, including 9 large-scale or professional remodeling and storage bases with complete facilities and functions. From 1999 to 2005, the Ministry of Railways invested 600 million yuan to carry out emergency reconstruction and expansion of capacity at the Manzhouli Railway Port, added and transformed multiple lines, and built new professional reloading yards for containers and crude oil. The capacity for receiving and reloading has been greatly improved. The wide rail station has a storage capacity of 2020 vehicles and a standard rail of 17,12 vehicles. The annual comprehensive exchange capacity is over 20 million tons. In 2005, the import and export freight volume reached 16.88 million tons.
The Manzhouli International Highway Port was put into use in 1998. It is a relatively large border highway port in China with an area of 640,000 square meters. Among them, the cargo inspection area is 340,000 square meters. Three cargo inspection channels with one entrance and two exits have been established, and one of the exit channels has been used as a special exit for vegetables and fruits. The annual passing capacity is 2 million tons.
In September 2013, the first “Summano” international container train departing from Manzhouli Port successfully launched. As of October 2018, there are 32 border routes and 16 entry routes through this port’s China-Europe class. The origin of the goods radiates the Yangtze River Delta, the Pearl River Delta, the Bohai Rim, South China, Central South, and Southwest. The goods are exported to 28 cities in 13 European countries including Russia, Germany

Port construction
The Manzhouli Port is composed of railway, highway and aviation ports. The comprehensive loading capacity of the existing cargo yard at the railway port reaches more than 20 million tons. After the completion of the Haiman Complex, the annual capacity of the port will reach 70 million tons. 3 million person-times. The air port has been temporarily opened to the outside world since 2005, and has opened temporary international routes to Manzhouli-Irkutsk, Russia, and Manzhouli-Chita. It is expected that the air ports will be officially opened to the public at the end of the year or at the beginning of the year. After the completion of the second-phase expansion project of Xijiao Airport, the annual capacity of Manzhouli Air Port to transport domestic and foreign passengers can reach 1 million.
Foreign economic and trade cooperation
Since 2000, the city’s foreign trade and economic and technological cooperation have made great progress. From 2000 to 2006, a total of 369 foreign engineering contracting and labor service cooperation projects were approved, with a contract value of 115 million U.S. dollars, a turnover of 71.3 million U.S. dollars, and 13,267 laborers actually dispatched. In 2007, the total export volume of vegetables and fruits was 355,000 tons, and the foreign exchange earning was 91.17 million US dollars, a year-on-year increase of 47.4%. The fields of cooperation include construction engineering contracting, forest harvesting and processing, agricultural planting, railway refitting and other fields. The cooperation area covers Russia’s Chita, Ulan-Ude, Irkutsk and Krasnoyarsk.
Development of Port Industry
Combined with the actual situation of our city, we have broken the regional division, and focused on the construction and construction of three industrial blocks: Zahanoor Energy Heavy Chemical Industry Base, Import Resource Processing Park, and Comprehensive Industrial Park. Zhalunor Energy Heavy Chemical Industry Base focuses on the development of energy conversion and comprehensive utilization industries mainly based on coal, electricity, chemicals, high-load energy and special metal smelting. The Import Resource Processing Park focuses on the development of imported resource processing industries and new building materials industries, which are mainly based on deep processing of wood. The comprehensive industrial park focuses on the development of Russia ’s export product assembly and processing industry, port logistics industry, production service industry, and pollution-free. Based on these three industrial blocks, it is promoting 42 key industrial projects with an investment of more than 10 million yuan. The total investment is 8.4 billion yuan, of which 10 projects exceed 100 million yuan.
Port tourism development
Continuously improve the level and level of cross-border tourism, and have successively built a number of iconic tourist attractions such as Matryoshka Square, Chagan Lake Scenic Area, European-style Tourism and Wedding Palace, 1816 shopping malls in various cities, and 1062 catering services The number of beds in star-rated hotels has reached more than 5,400. The construction of tourism infrastructure in Manzhouli is developing rapidly, with high quality, and on a large scale. Throughout the year, border tourism inbound and outbound reached 1.805 million people, a year-on-year increase of 12.5%. The total tourism revenue was 2.71 billion yuan, an increase of 16.9%; the foreign exchange earnings from tourism reached US $ 243 million, an increase of 15.9% year-on-year.

Manzhouli Port, China ’s largest railway port and China ’s largest port to Russia, is implementing the largest capacity expansion project to date to meet a new round of rapid development of China-Russia trade. The capacity expansion project includes capacity expansion of railway ports and highway ports, with a total investment of more than 5 billion yuan. The Manzhouli Port in the northeast corner of the Inner Mongolia Autonomous Region is responsible for over 60% of Sino-Russian trade. In 2006, the total volume of imported and exported goods at Manzhouli Port was approximately 21.71 million tons, and the number of inbound and outbound personnel was approximately 1.69 million.
According to the statistics of Manzhouli Port, the bilateral trade volume between China and Russia in 2006 reached US $ 33.4 billion. The governments of the two countries have also stated that they will work to bring bilateral trade to US $ 60 billion to US $ 80 billion by 2010.