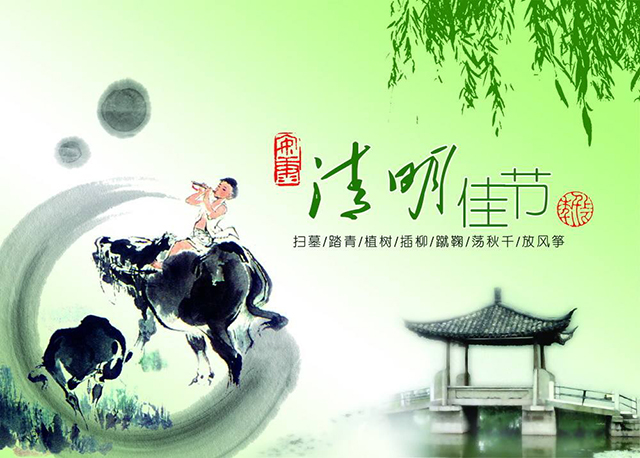 As one of the traditional festivals, Ching Ming Festival is the most important form of worshipping the tombs. Throughout the ages, we Chinese all have the habit of sweeping graves during the Ching Ming Festival. The wanderers who are in other foreign countries will always return to their native land before the Ching Ming Festival to sweep the tombs for the ancestors. When sacrificing graves, it is common to first weed the graves, add some new soil, then put on the offerings, burn incense, or burn some paper money, or hang some paper on the branches to hold a simple ritual, such as Shantou, gongs, etc., tell the ancestors about the big things happening at home in the past year, and then how to properly handle them, so that the ancestors do not have to mourn and care, and express their concern and memory for the ancestors.
According to the different places, the Ching Ming ancestor is generally divided into two types: the tomb offering and the ancestral temple. Ancient emperors generally established their own ancestors, also known as Taimiao; most of the wealthy families also built ancestral halls for their ancestors, and they can sacrifice in the ancestral halls; but most of the people are still mainly tombs, so the Qingming sacrifices are generally called sweeping graves.

The Ching Ming sacrifice ancestors should be held in person at the cemetery, but some families could not go to the cemetery for some objective reasons, so there was a way to adapt to local conditions – burning packets. This is the main form of ancient Ching Ming ancestor in Beijing. It is impossible to go to the cemetery. It is placed in the main hall of the ancestral hall or the house, or it is outside the yard, at the doorstep, on the roadside, and on the riverside. Some paper money, gold and silver foil paper ingots and so on.

During the Ming, Qing and the Republic of China, there were seven or eight city temples in old Beijing. The incense was very prosperous. The city temple was dedicated to the “City Grand Master”. Everyone went to the city temple to burn incense and worship during the Ching Ming Festival, praying for good weather, peace and safety.

During the Ching Ming Festival, it is the time when the revitalization of all things, the bright spring, and the vitality of the world. It is a good time for an outing. Legend has it that the custom has been formed as early as the pre-Qin period. Every spring, everyone has to accompany the spring and enjoy the scenery in the suburbs. In the Tang and Song Dynasties, this custom was particularly prosperous.

The Ching Ming Festival swing is also an ancient custom that has been circulated. It was first called the Qianqiu, and later it was changed to a swing because of some taboos. The starting swings are made of branches and then made of ribbons. Later it gradually developed into a swing with two ropes and pedals. Swinging can not only exercise the courage of people, make people more brave, but also improve their health. They are still deeply loved by the masses.

The game of tug-of-war was played by us when we were young. This activity was actually prevalent in the Spring and Autumn Period, but the earliest names were called “catch” and “hook strong”. It was only during the Tang Dynasty that it began to be called “Tug of War”. During the Emperor Xuanzong of the Tang Dynasty, a large-scale tug-of-war competition was held during the Ching Ming Festival, so since then, the tug-of-war has become the custom of the Ching Ming Festival, which has been passed down to this day.

This is the earliest football activity in China, and its origin can be traced back to the Warring States Period. Cù Jū refers to an ancient ball made of leather and filled with feathers. Cù Jū is a kind of game activity that people loved during the ancient Ching Ming Festival. In the Han Dynasty, Cù Jū has become a very professional sport and has a relatively sound game rules. In the middle of the Qing Dynasty, with the introduction of modern football, the traditional shackles were quickly replaced. However, in early 2004, FIFA confirmed the fact that football originated in China.

In the Ching Ming period, people like to eat Fa Gao. The meaning of the cake is “get rich” and “high rise”. The hair cake is made into a paste and then added to the hair powder. It is steamed for three or four hours. Therefore, it is necessary to “Rich” and “high” for steaming. It is also auspicious for everyone to eat rice cake.